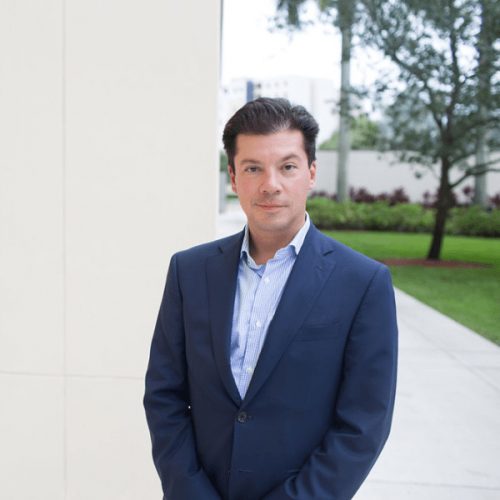 Oliver Ionita, senior director of development for the College of Communication, Architecture + The Arts (CARTA), was named the recipient of the Next Horizon Award on behalf of CARTA at the FIU Foundation’s Leadership Conference for the college’s FIU Next Horizon campaign efforts.

The Next Horizon award recognizes those who have been instrumental in aiding the goals of the $750 million Next Horizon campaign through supporting university metrics around student success, endowment creation and the acquisition of new donors; consistently persevering in building a continuous pipeline and portfolio; and exceeding unit goals.

“Oliver is dedicated to advancing the missions of CARTA and FIU,” said Howard Lipman, CEO of the FIU Foundation. “We’re proud to recognize his work, which has been instrumental in our journey to the Next Horizon, and we are fortunate to have him as a member of the Foundation team.”

With the help of Ionita, Brian Schriner, dean for the College of Communication, Architecture + The Arts and the CARTA fundraising team, CARTA raised a total of $10.3 million in the 2019-2020 fiscal year – surpassing the college’s initial $4 million fundraising goal for the year.

Throughout the length of the campaign, CARTA has succeeded in securing six seven-figure gifts and multiple six-figure gifts amounting to over $16 million over the last three years.

Contributions such as these further the mission of CARTA and have allowed the college to not only consistently meet its fundraising goals for the past three years, but surpass them as well.

“It’s very exciting and humbling to be named the recipient of this award,” says Ionita. “This recognition represents the success of Dean Schriner and the entire CARTA team.”Currently, the college is more than half way to its total $50 million fundraising goal.  With the pandemic though, CARTA has also begun focusing its fundraising efforts on emergency funds for FIUstrong to help Panthers in need.

PrevPrevious StoryAsk Tony: Career Advice from an LA Agent
Next StorySpring 2021 at FIU: What to expectNext