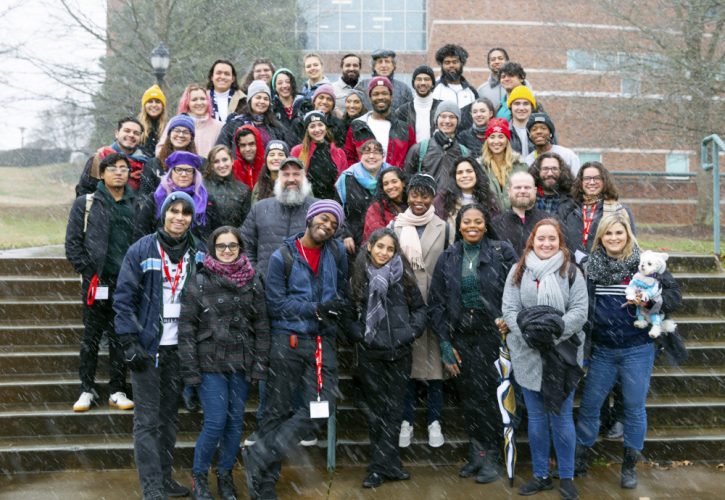 Last week, a contingent of 46 FIU Theatre students and faculty attended the Region IV Kennedy Center American College Theater Festival in Spartanburg, South Carolina where they presented their production of Red Velvet and were recognized for the excellence of their work.

FIU was one of three universities from the across the southeastern United States invited to present a production at the festival. They performed last semester’s poignant play about Ira Aldridge, the first black man to the play Othello.

The play was presented twice in one day to over 700 theatre students, faculty, and professionals from across the region.

During the five-day festival, students also presented their work to industry professionals and many of them walked away top honors.

Kendall Vega was awarded the KCACTF National Stage Management Fellowship for her work on Red Velvet. She was selected from over 60 stage managers and will travel to the national festival in Washington, DC this April. She is the fourth FIU Theatre stage manager to win this prestigious fellowship in the last five years.

“It felt pretty incredible to hear my name called,” says Vega. “It felt like a lot of hard work has paid off.”

Sage also was awarded a scholarship to attend the Stagecraft Institute of Las Vegas this summer where he will receive hands on training on some of the industry’s most cutting-edge technology.

Correa was also awarded the TTS Studios Kickoff Award. The award focuses on the communication between the designer and technical staff and is named after the “kickoff” meeting that first takes place when discussion and communication begins on a new project, production, or event.

Students also attended numerous professional workshops. For Jash Sanghavi, the workshops were one of the highlights of the experience.

In the forum theatre workshop, he and several of his classmates were able to create a scene connected to the environmental challenges facing the planet.

“We learned about collaborating with a group and created a short improvised scene about tree cutting in Florida,” says Sanghavi. “Creating a story from beginning to end with clear points was something that was really cool to work on.”

The Kennedy Center American College Theater Festival is a national theater program involving 20,000 students from colleges and universities nationwide. For over 50 years, the organization has served as a catalyst in improving the quality of college theater in the United States. KCACTF has grown into a network of more than 700 academic institutions throughout the country.