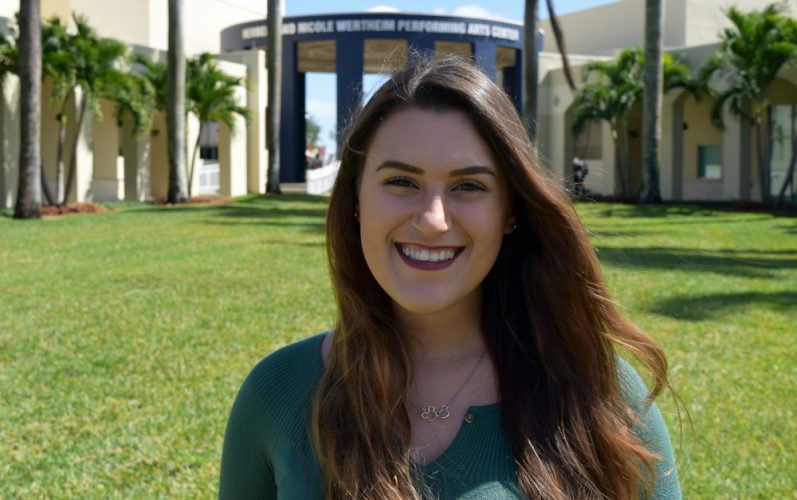 Cosio was awarded the fellowship at the regional KCACTF this past February for her work on FIU Theatre’s production of Ubu Rex. She was selected out of 48 stage managers from around the southeastern United States. This is the third year in a row that an FIU stage manager wins the fellowship.

For Cosio, hearing her name called was one of the highlights of her young life.

“It was unreal. You go through school doing everything backstage. The audience never sees you or even knows what you do. And then to be recognized in a huge theatre and have everyone in the house, whether they know you or not, clapping and cheering and standing was such a great feeling. As a stage manager I’ve never taken a bow. I’ve never gotten that standing o. It was overwhelming.”

Although the audience never sees their work, stage managers are the backbone of any production. They are responsible for making sure the entire team is on the same page and that everything is running as smoothly as possible. They are the first ones to show up and the last ones to leave.

“The only difference between what our stage managers do and what professional stage managers do is that our students have to go to class and do their homework,” says Professor Tony Galaska. “It’s a lot of responsibility. A lot of people depend on them for information and to keep things running smoothly. Even our faculty directors and designers depend on them.”

During her time at FIU, Cosio has shouldered a lot of that responsibility. She has stage managed three main season shows, an opera for the School of Music, and two summer shows.

“One of the hard things about a faculty director working with a student stage manager is there can be a power imbalance,” says Professor Michael Yawney, the director of Ubu Rex. “Chelsea had no problem with that. She was never afraid to do her job. I felt so completely free on this production because I knew that if I ever did anything wrong, she would pull me back.”

Working on Ubu Rex presented some major challenges for Cosio.

“This was a very hard show to stage manage,” says Yawney. “You have 14 actors spinning around like tops, going crazy all over the set. Props are going everwhere, things are crashing to the ground, and her job was to keep track of it all. Chelsea did so without ever appearing flustered. She brought a sense of calm to the chaos.”

The show also had an additional challenge. It was invited to perform at the regional festival in a completely different space than where it was originally performed. She had to manage that entire process, making sure everything and everyone was where they needed to be. This was the second year she stage managed a show that traveled up to the regional festival (last year’s La Nona).

“The biggest thing I learned working on Ubu was patience,” she says. “It was a big production team and a huge cast and so there’s going to be miscommunication. My job is to limit that and make sure everyone has all of the information they need. I also learned to trust my team more, to use the tools I have and the people around me to get things done.”

Cosio was destined to be in the arts. One of her first memories was watching a Disney movie as a five year old and turning to her mother and saying “I wanna do that!”

From elementary to high school she was either acting or singing in the chorus. But it never really felt like the right fit for her.

Then in her final two years of high school, she went backstage. Her chorus at Coral Reef Senior High stages an annual end of the year show. This is a huge production with a lot of musical numbers, costumes and sets. The students run the show and are responsible for everything.

Cosio found she had a knack for coordinating things backstage. Then her former classmate, Luisa Rodriguez, came back to visit. Rodriguez had graduated one year earlier and was now a theatre major at FIU.

“Luisa came back and told me there’s a major for what we do,” she recalls. “I had no idea what stage management was, but I knew I liked what I was doing and was good at. As soon as I visited FIU, I knew this was where I wanted to be.”

Four years later, Cosio finds herself ready to graduate. She already has her next step lined up. She was hired by the Florida Studio Theatre in Sarasota as a stage management apprentice for one full year.

But before that, she’s ready to make the most out of her trip to Washington, D.C., for the national KCACTF.

“I’m ready to be a sponge. I’m excited to meet the other region fellows, learn from professionals and see how the big DC theatres run. I feel like a baby bird that’s being pushed out of the nest.”