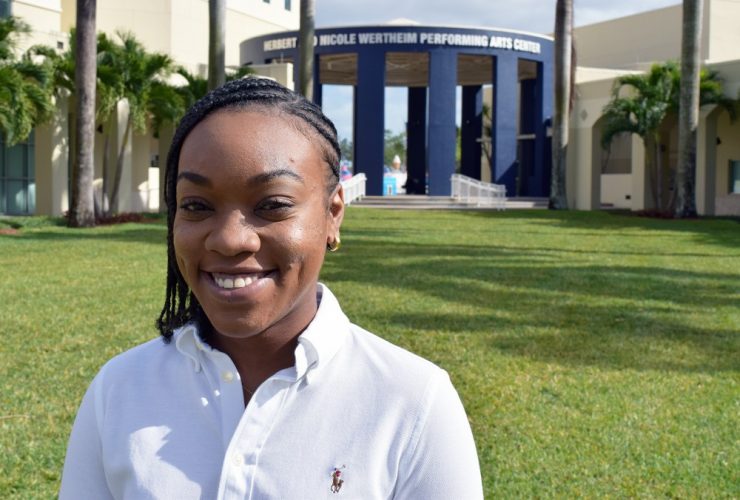 Williams, a junior, was invited to the festival after being recognized with the award for Theatrical Design Excellence at the regional KCACTF last February. The award was granted to her for her work as scenic designer for FIU Theatre’s production of Ubu Rex last Fall.

“I was shocked when they called my name,” she says. “It feels good to have professionals look at my work and decide its worthy enough to be recognized at that level.”

What makes the award even more impressive is that this was Williams’s first fully realized set design.

“You’re never 100% sure that a student is ready to take on the responsibility of designing a show,” says Professor Tony Galaska, head of design for FIU Theatre. “But we had a pretty good idea Apriah was ready. The way she approaches the work and presents herself is very focused and professional.”

Ubu Rex presented Williams with an unusual challenge for her first time out. The absurdist play about a tyrannical and childlike king seems impossible to stage at first read.

“When I first read the script, I had no idea how this could be staged,” says Williams. “One minute they’re in a castle, then the next minute they’re in a cave. Then all of a sudden there’s a horse. It’s all over the place. I knew I had to ground the set somewhere. That was the toughest part for me because I’m a very literal and realistic person.”

She finally settled on creating an elegant banquet hall that Pa and Ma Ubu, the play’s monstrous king and queen, could crash. The set featured long and carefully set tables with tall columns and curtains enclosing the audience in the space. The idea was to have the audience walk in to an opulent setting only to see it torn apart by the end of the play.

“The strength of Apriah’s design was that she was willing to let us destroy it,” says the play’s director, Professor Michael Yawney. “She knew that this was a wild and violent play, and she designed a pristine, perfect setting with the full knowledge that the actors would destroy it.”

For scenic design professor Jennifer Ivey, the reason her concept worked so well was because of Williams’s attention to detail.

“Apriah is a very clean and precise designer and that really helped make her design stand out. Even though the set gets destroyed by the end, she was very particular with how everything looked. I enjoyed watching her break out of her comfort zone.”

Williams has achieved great success in a very short period of time. It wasn’t until she was 16 years old that theatre even appeared on her radar.

She was born in the Turks & Caicos, a small chain of islands in the Caribbean. “There is absolutely no theatre there,” she recalls.

She was introduced to what would later become her passion while visiting New York City. She saw a Cirque du Soleil show with her family and was fascinated.

“I thought it was so cool,” she recalls. “I was amazed by the performers but also by how everything looked. I knew I wanted to be involved in that somehow.”

When it was time to go to college, she enrolled at Wheaton College in Massachusetts. She enrolled as an architecture major and during her first meeting with her academic advisor asked him if there was such a thing as “theatre architecture.” He sent her to the theatre department.

“When you don’t grow up around the theatre you don’t know that any of this exists,” she says. “I had no idea how everything I saw up on stage was created. There was a whole world of designers that I knew nothing about.”

Soon after that she found herself moving to Miami with her parents and enrolling at FIU in the Fall of 2015.

“FIU Theatre has shown me parts of myself that I didn’t even know existed,” Williams says. “I always appreciated the arts, but I didn’t know I had an artistic and creative side to myself. I’ve been able to dive into that world here and explore it.”