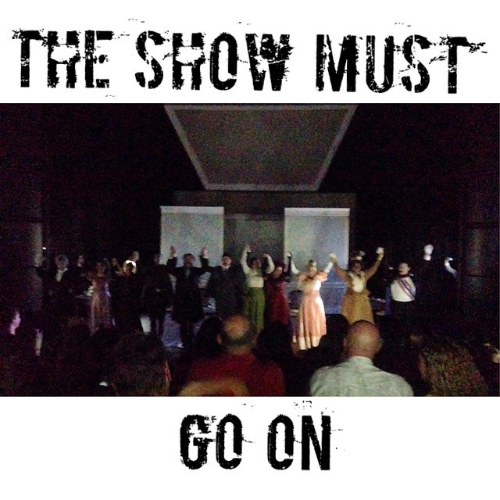 CARTA News » Department of Theatre » The Show Must Go On!

The Show Must Go On!

On Thursday, October 2, the whole of The Wertheim Performing Arts Center was buried in utter darkness as a monster storm struck outside the Main Stage theatre while Act II of Oscar Wilde’s An Ideal Husband was in full flow. It was a random stroke of luck that Gaby Lopez (Assistant Events Manager), BJ Duncan (Technical Production Assistant) and Geordan Gottlieb (Assistant Technical Director) were all in the audience on a night that they were not required to be there.  Thinking quickly, Gaby immediately shone the light from her cell phone onto the stage to ensure the actors’ safety while Geordan professionally advised the audience to remain calm, stay seated, and encouraged the actors to continue. One would expect an abrupt end to the show, even an irate audience, or perhaps mass panic, but this was not the case. As they say in this business, “the show must go on!” The audience remained seated, with everyone graciously offering the lights from their cell phones to illuminate the stage. The crew, along with BJ and Geordan, found additional lights in the department and the actors finished the last twenty minutes of their performance, barely perturbed by the slight hiccup. According to Gaby, “it was the most beautiful thing to see! The way the actors took the situation in stride and continued their performance was great, the calm support from the audience was admirable and even though we had been trained for this, we had never experienced this situation before, so the outcome was pretty good!”

Department Chair and director of An Ideal Husband Phillip Church recounts Thursday night’s experience, “At least twenty phones were pointed in the direction of the stage. Audience members’ phones included!  It was, to say the least, a surreal experience, but the actors flawlessly marched on, and it reminded us, without the sound of that continual low-humming air conditioning, just how powerful pure silence and quiet can be. The voices of the actors were magnified and so sharp and crystalline. The pauses were so much more profound, aided by the suspension of alien light that gave the whole scene an eerie yet moving patina of a black and white movie. The curtain call was received with raucous cheers – even more phone lights lit up. This was without a doubt, a memorable event and one that many of our students are sure to recall with their children and grandchildren. And in this way are legend and myth birthed! Congratulations to all our students who, in an instant, stood their ground artistically, remaining in the zone of artistic inspiration. And thanks to our audience members who had the faith to remain with us.  It truly was an extraordinary theatre experience.”

Zack Myers, Danny Leonard, Allyn Anthony, and Pia Isabell Vicioso-Vila were all on-stage when the lights went off.  Pia was stunned at first, but took her cue from the audience and her fellow actors who did their best to bring humor to the situation.  She too immediately adopted a ‘the show must on’ attitude and finished her lines. Pia too was thrilled by the audience reaction.“It was truly amazing to see the front row of the audience all get up one by one and place their phones on the stage so that we would have enough light to continue.”

Lovanni Gomez describes the incident as amazing and intimate. When the show ended, he felt as though he was walking away from something special. It was a very different experience from other nights.

Waiting to go on-stage was BFA Performance student Sofia Sassone. Her first thought was concern for the safety of her fellow actors coming off-stage in the dark. She was surprised to realize that they were going to continue but glad she had the opportunity to experience this remarkable situation. She describes it as, “the best thing ever:”

After the show ended, some members of the audience actually remained in the faintly lit rotunda of the Herbert and Nicole Wertheim Performing Arts Center to greet the cast and offer their support. Overall, the actors were greatly appreciative of the encouragement and love they received. The Department of Theatre is proud of the students and staff for responding with such aplomb in an unexpected situation. Using cell phones to illuminate a stage was certainly an innovative choice and most definitely a sign of the time. The show must go on! And it did! 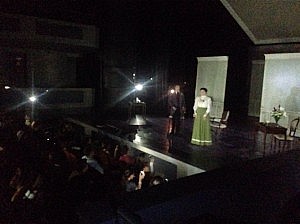