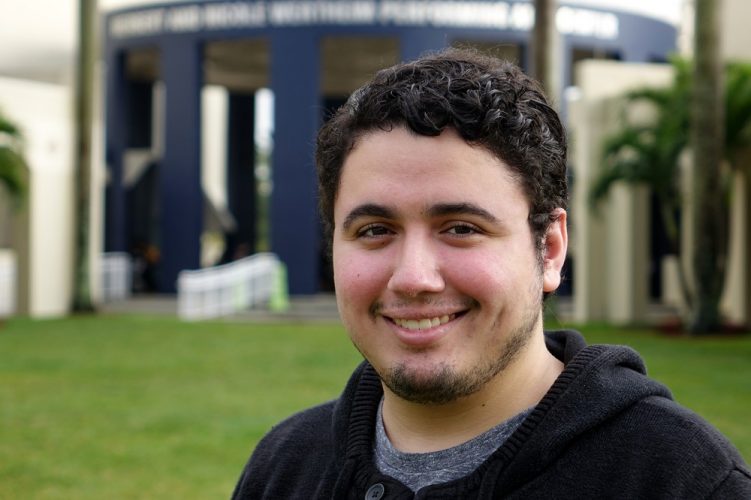 Pedro Urquia, a senior theatre major, was awarded a scholarship by the Institute for Theatre Journalism and Advocacy to attend the Kennedy Center American College Theater Festival (KCACTF) in Washington, D.C., next week.

Urquia was a finalist for the scholarship at the regional KCACTF in February. His work was then reviewed by a national selection panel convened by the Kennedy Center. From the eight regional finalists, the panelists selected four students from across the United States to attend the D.C. festival.

“It was a relief when I finally got the news,” he says. “It was a little nerve-racking waiting to hear if I’d be selected. It’s a great honor.”

At the regional festival, Urquia spent the week completing writing assignments and in workshops with professional theatre critic Andy Propst.

On the first two nights, participants watched a play and then wrote a 600 word review by the following morning. During the workshop, they would read their work aloud and receive feedback from Propst and the other participants before going off to make revisions.

“We were there to help each other become better writers. No one was trying to bring anyone down or sabotage their work. It was a very collaborative environment, and I think everyone improved a good amount because of the process.”

Participants also had to write a 1,200-word think piece about something related to the festival. Urquia’s piece focused on a pattern he saw emerging in some of the productions.

“A lot of the work that was being presented at KCACTF this year was advocating for social justice movements,” he says. “While I agree that theatre should say something about the world we live in, I found a lot of the work was manipulating the audience and patronizing them. My think piece was about how those kinds of plays would be more effective if they trusted the audience to get what they were saying instead of hitting them over the head.”

At the national festival, Urquia will be working with and learning from critics such as Peter Marks from The Washington Post and Bob Mondello from NPR and the City Paper. One of the four participants will then be selected for a fellowship at the prestigious National Critics Institute at the O’Neill Theatre Center in Connecticut this July.

When Urquia was in high school, he had a very specific dream. He wanted to be a video game broadcast journalist. More specifically, he wanted to be the host of X-Play, a show about video games on cable’s G4tv that he watched religiously.

“I was determined to get on that show,” he recalls. “I looked up information about their internships online and started learning the things I’d need to know to get in.”

In 2013, however, the show and the network went off the air. He saw the already narrow field of video game broadcast journalism disappearing right as he was about to start diving into the journalism major at FIU.

That’s when he took an Intro to Acting class with Professor Robinson. One of his classmates in that class was auditioning to join the theatre program and encouraged Urquia to apply. He gave it a shot and got accepted.

“I auditioned on a whim,” he recalls. “After getting in, I thought, well, I guess I’m doing theatre now.”

He played numerous roles during his time here, including the tyrannous and childlike king Pa Ubu in Ubu Rex. But his ambitions have now shifted to writing.

After he graduates at the end of the semester, Urquia plans to work for a year before applying to MFA programs in playwriting, screenwriting and dramatic writing.

“I love acting, but I’m inspired by artists like Tina Fey, Amy Poehler and Conan O’Brien,” he says. “They started out as writers. Writing excites me in a very different way than acting does. It’s a chance to explore an entirely new environment. Most people look at a blank of piece of paper and they’re intimidated. I look at a blank piece of paper and I see an opportunity.”