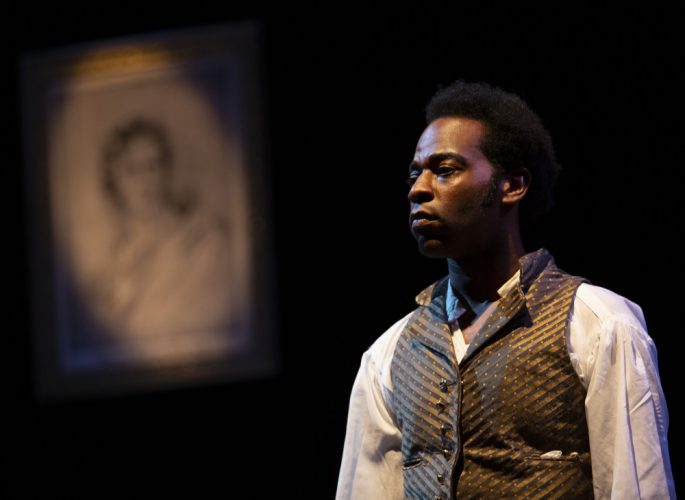 FIU Theatre’s final show of the Fall tackles difficult issues of race, representation, and the courage it takes to challenge the status quo and tear down barriers. Red Velvet, written by Lolita Chakrabarti in 2012, tells the remarkable true story of Ira Aldridge, the first black man to play the title character in Shakespeare’s Othello.

The year is 1833 and the setting is England’s Theatre Royal in Covent Garden. The theatre company is in the middle of a successful run of Shakespeare’s classic play when the lead actor, Edmund Keane, falls gravely ill.

Keane was a famous and well respected actor who played all the lead roles. When playing Othello, a Moor, he performed in blackface — a common practice at the time.

Without their lead actor, company manager Pierre LaPorte had to act fast. The show, after all, must go on.

That was Aldridge’s cue to enter the scene. His casting challenged the rest of the cast, including Keane’s son Charles. Audiences and critics were shocked. The times were changing.

“The reason we have to tell the story is because there’s an Ira everywhere,” says Warren Welds who plays Aldridge. “There’s somebody, even if they’re not black, who wants to pave the way and is doing so much.”

The play gives the audience a glimpse into the backstage world of the theatre that they normally do not get to see.

“Since its a play about a play, it gives the public the chance to be part of the process and mechanics of what makes theatre,” says Phillip M. Church, the play’s director. “Even though it was a hundred years ago, it’s still quite relevant.”

Red Velvet presents many challenges for the cast of student actors. Characters in the play speak in British, French, Polish, Jamaican, and German accents.

“I decided to watch and listen to many British actors, especially Jason Isaacs and Michael Fassbender for their sense of physical presence and their overall dialects,” says Samuel Krogh, who plays Charles Keane.

For Ana Maria Gorayeb, who plays journalist Halina Wozniak, getting her costume for the first time was one of her favorite days of the process because she enjoyed seeing the little details come together.

“The character shoes and corset really helped me shape the body of who Helena really is,” says Gorayeb.