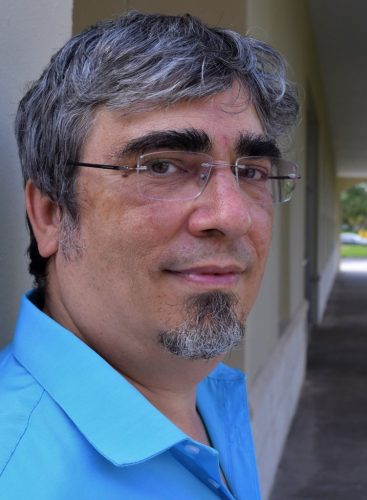 Michael Yawney, associate professor of theatre, believes in the power of theatre as a force for change.

Yawney has been a Panther since 2007. He started as an adjunct professor, but when a full-time position opened, he jumped at the chance to apply, as he had become drawn to the school and to his classes. “FIU, like Miami, is truly such an international place. The students brought so many perspectives and ways of seeing things into the classroom that it became really exciting to teach.”

Yawney not only teaches classes in the Theatre department, such as directing, playwriting and theatre history, but is also associated with the Honors College. He teaches a freshman seminar with physics professor and fellow FIU ADVANCE team member Pete Markowitz, which he has done for six years now. Teaching the interdisciplinary class is different from teaching subject matter, he says. “A lot of times, students have been rewarded for taking tests/retaining information. In this seminar, we teach them how to think and how to be responsible people in the world.”

Yawney’s love of theatre is tied to his love of community. “Theater is collaborative – no one person has all the answers. We work together, we share experiences, and we find the best solutions to a problem.” It is perhaps no coincidence that his philosophy of theater is also his philosophy of teaching as well – working together to move things ahead.

That desire to move things ahead and to make the world a better place is what helped drive his interest in becoming part of the FIU ADVANCE team. “I’ve worked in many different types of workplaces, and have seen the good, the bad, the ugly,” he says. “I think we’re responsible for making the good better and getting rid of the bad and the ugly. The Office to Advance Women, Equity & Diversity and FIU ADVANCE really works toward that goal.”

Yawney works with the Bystander Leadership Program, regular workshops offered to faculty that explore how to notice and intervene in situations of bias. It’s no surprise he believes the acting portions of Bystander are incredibly important. “When you take on a role, you understand things better. It’s why we love film and TV, because we imagine ourselves in that world,” he says.

And he points out the impact of acting not just as an intervener. “In the role plays, people get to be a bystander, or perhaps even more importantly, they get to role play the negative people, the ones who are abusing power. I think in a way, that’s important – once you’ve been inside that skin, it’s easier to talk to those people in real life.”

Much of the value of Bystander lies in the practice it allows participants. “When we’re preparing for a job interview or some interpersonal thing, we practice. We talk to ourselves in a mirror or talk with a friend. However, we don’t often practice dealing with the things that happen in the workplace, we don’t practice those. By practicing scenarios, people leave the workshop feeling more confident, and I hope they’re not more confident just about intervening. I hope they feel they have more confidence as a whole.”

PrevPrevious StoryAsk Tony: Career Advice from an LA Agent
Next StoryFrom center stage to the classroomNext