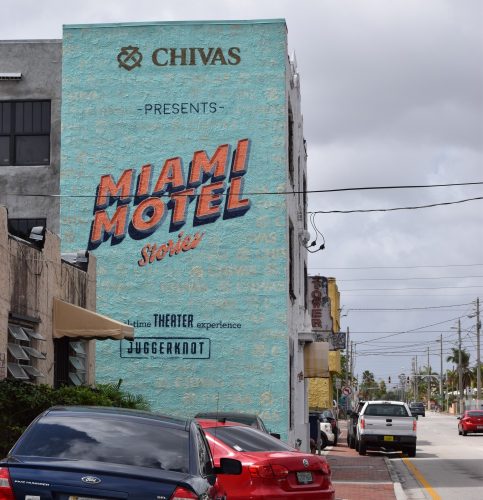 Miami Motel Stories is an immersive theatre experience the likes of which Miami has never seen before. It features the work of many FIU Theatre alumni.

Juggerknot Theatre Company is resurrecting the 90 year old Tower Hotel in Little Havana and giving audiences a glimpse of the stories left behind by its residents.

The building opened in the 1920’s and has undergone as many transformations as the neighborhood it calls home. The scenes, written by Juan C. Sanchez and directed by Tamilla Woodward, span the decades. As you walk through the halls and into the rooms of the building, you find yourself right in the middle of a moment in the hotel’s history, weaving in and out of the private lives of a diverse cast of characters.

“People crave to be immersed in things in different ways,” says Tanya Bravo, Juggerknot’s Artistic Director. “Audiences want to be active participants and not just passive spectators. So the question was how can we make that happen?”

Several years ago, Sanchez and Bravo collaborated on Paradise Motel, a play which took place in a Little Havana motel over several decades. The idea was so rich that the team decided to take it to the next level – moving the concept to an actual building and having the audience follow the story from room to room.

Juggerknot was awarded a Knight Foundation grant to develop the idea and then began searching for the venue. They pitched the concept to real estate developers Bill Fuller and Martin Pinilla of the Barlington Group who instantly had the perfect building – the hotel they were currently renovating.

FIU Theatre alumna Michelle Antelo (’12) is the project’s Managing Director. “None of us have ever done anything quite like this, but that’s the reason why I’ve always been drawn to theatre. I love the idea of pushing past boundaries, beyond what any of us think we’re capable of.”

The process was an unusual one. While the creative team was working hard to be ready for opening night, the developers were renovating the building in order to meet their own deadlines.

“Working in a live construction site really pushes everyone out of their comfort zone,” says Antelo. “There was a lot to coordinate to make sure that the creative team and the contractors and developers were all on the same page.”

Since audience would be traveling through the building and going right into the small rooms, the details had to stand up to the closest of scrutiny. Marina Pareja, FIU Theatre design faculty and alumna (’98), was the scenic, costume, and props designer for each of the 21 activated rooms in the hotel. FIU Theatre alumni rounded out the design team with Ozzie Quintana (‘02) designing sound and Elayne Bryan (’11) designing lights.

“Each room is a different world,” says Pareja. “All of the furniture and props have to be specific to the time, but you also need to keep in mind the person who is living in that space. How does the space reflect who they are and how they live?”

When you arrive at the hotel, you enter the lobby for your check in. There are three kinds of tickets that give you access to different parts of the hotel.

The first floor is a fun, free-flowing experience. A colorful cast of characters captures the flavor of the neighborhood. You talk to them and they talk back. You can grab an espresso while catching up on the latest neighborhood chisme (or gossip) in the cafecito room, “check-in” with the schmoozer hotel manager Jorge, or be a contestant in a Miami-themed trivia “game show.”

Alumnus Charles Sothers plays JC Santos, the game show’s very “Miami” host. “I’ve learned a lot about Miami working on the questions for the game show,” he says. “This is the kind of stuff I didn’t learn in school.” He set up an Instagram account (@JCSprods) where his character live streams every round, “when the wifi is good.”

As you make your way onto the second floor, things take a mystical turn. Gilbert, your smooth-talking, Guayabera-wearing guide leads you up the stairs. “There are decades of memories living here,” he says before challenging you, “if you open your eyes, you’ll see what I mean.”

The color of your key determines which three rooms you go into. Alumni Ernesto Gonzalez (’17) and Anderson Freitas (’17) join the cast of some of Miami’s most talented actors.

Gonzalez, whose play is on the “blue track,” is Puerto Rican Paul, a cocaine dealer during the 1980’s. He barges into the room with news for his partners of a police raid going down in the neighborhood.

The experience for him has been unlike anything he’s ever done. “It’s not a set, but an actual living space. The hotel feels like home at this point.”

Freitas, whose play is on the “pink track,” plays a World War II vet in the 1940’s during a time when the hotel became a hospital for injured soldiers. Freitas, himself a veteran of the Iraq War, plays the emotional scene nine times a night.

“Each time is very different,” he says. “Because the audience is up close and in the room with you, they really affect the energy of the scene.”

Tickets for the first floor (the “Check-In” ticket) are still available. Students can purchase tickets at a special discounted rate of $10. Just enter the code “Student10” on the homepage.

More information can be found at the Juggerknot Theatre website.

Once the show closes, the Tower Hotel begins a new transformation, as the first boutique hotel in Little Havana, opening up a whole new era of stories.