Margaret M. Ledford hails from Chattanooga, Tennessee where she received her Bachelor of Arts in Theatre and Speech from the University of Tennessee and studied Cubo-Expressionistic Scenography Post-WWI abroad at Masaryk University in Brno, Czech Republic.   She is a six time Carbonell Award nominated director, a multiple Silver Palm Award winner for Direction and she was the Associate Artistic Director and Resident Director for The Promethean Theatre for eight years.  Margaret has directed for many South Florida theaters including City Theatre, New Theatre, Naked Stage, Mosaic Theatre, Caldwell Theatre, and Florida Stage.  She currently serves on the board of the South Florida Theatre League as Board President.

Here’s what she has to say about SLEEPING BEAUTY:

This isn’t your childhood’s Sleeping Beauty.  Yes, yes, it has a sleeping princess who is awakened by a handsome prince’s kiss; however,  everything before, after and in between is not only different, but far more base, dark and infinitely more enlightening than the Disney-fied version. This Sleeping Beauty as written by British writer/director Rufus Norris is based on Charles Perrault’s 1697 fairy tale.  In that fairy tale as in this play the kiss that wakes the princess is just half the story.  The other half is filled with ogres, bodily functions, babies, songs and a discerning insight into the human experience as fairy tales in the past did before they were watered down.

Fairy tales introduce children into a mystical world of wonder where they can see and experience things about the human condition and journey that have yet to live through in life.  Central to this play’s fairy tale is the character of Goody the fairy. Unlike the fabulously dressed in black and purple and purely evil Maleficent, Goody tries to “do good.”  It’s a fairy’s nature “to do good,” Goody says.  At her best at “doing good” she can call the elements together to manifest an incantation that impregnates the childless Queen and King.  At her worst, she allows her own anger and hurt to best her regarding an intentionally overlooked party invitation for her. This slight drives her to craft the very spell that sends Beauty and the entire court into a 100 year sleep.  It is these opposites of good deeds and bad deeds or good and evil that this play explores and reconciles into one entity, the human being.

The world of this play is very like our own, a world filled of opposition and duality, where different sides of the same coin coexist: the wild forest versus the pristine man made palace, the fantastic gift of magic vs the bodily side effect of this power, ogres versus humans, control versus freedom, doing good in the world versus doing evil.  It is these dualities and polarities of Sleeping Beauty’s characters, environment and actions that allow the audience to explore these dichotomies within ourselves in our own human nature.  Isn’t man the epitome of dualism?

The human experience is an excellent example of duality:  it is birth and death, beginning and end.   We are made of both mind and body.  Our propensity to “do good” in the world is equal to our ability to do evil.  We are strong and can make changes in the physical world, but our flesh is weak, easily torn and broken.  We have a spiritual nature that aspires upward toward the divine and the heavens and yet we are bound by the laws of this world that plants out feet firmly on the ground.  We love and we hate, we desire and we refuse, we laugh and we cry.  We are human.  In this story Goody the fairy does a bad thing for the first time and in that single act begins her journey towards humanity.  A place where we all mistakes and learn and live through them.  This Sleeping Beauty is a fairy tale reminds us that we all are just human in all is beauty and ugliness.  A fairy tale that each child either beside us or in us can understand. 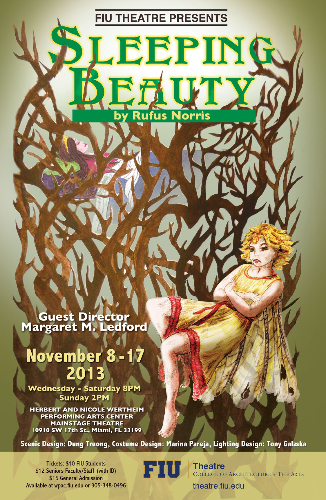 This adaptation of the classic fairy tale is a wildly irreverent treat that will delight children and grown-ups alike.  It focuses on Goody, the fairy who puts the famous curse on Beauty and spends the rest of the play trying to make everything turn out all right.  Yes, there is a princess who pricks her finger and falls into a magic sleep, but there is also a vicious ogre mother-in-law, and ungrateful queen, and, in the center of it all, a grumpy fairy whose magic comes with stinky gas.

See some photos from the production on CARTA’s Flickr.