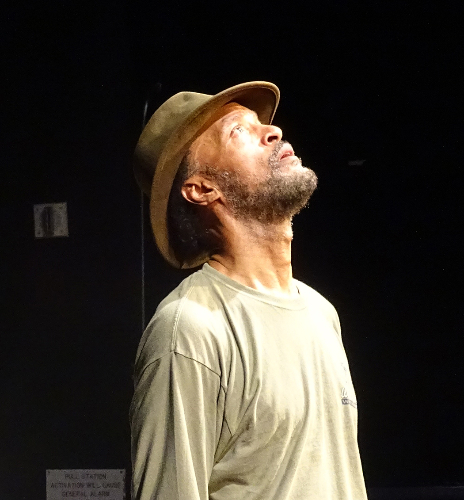 Despite being on the road for most of the year, Cedric Liqueur always returns to his hometown, Dade City, Florida, for the holidays. Occasionally, he has the opportunity to share his art with other Shakespeare and theatre enthusiasts on those trips home. Through his personal research he became interested in performing at FIU and contacted the Chair of the English Department, Dr. James Sutton, with his request. Dr. Sutton liked his proposal so he decided to partner with the Department of Theatre to bring Mr. Liqueur to FIU to meet with the faculty and students for a Q & A session and to present his fifty five minute performance of The Middle of King Lear. In anticipation of his visit, Mr. Liqueur has taken the time to answer a few questions about himself and his career.

Why did you write The Middle of King Lear? Do you have any expectations for the performance?

“I began my career in the theatre, reading the works of the greatest poet the world has produced, William Shakespeare. I’d thought about Lear for several years, but I knew that most of the actors who have played the part in the full plays often spoke of how difficult it is to carry the ‘weight’ of Lear. Some actors feel you have to do almost all Shakespeare plays to do Lear. When I made up my mind to do Lear, I hadn’t done all the plays, but I felt, and still feel, I can bring all I have to this complex, compelling, tragic character. My intent in this solo production is to explore what Shakespeare wrote about Lear without any other players. Call it ‘research.’ Research that I do each time I walk onto the stage.”

There are many colleges and universities in Florida, why did you approach FIU?

“The name ‘International’ caught my attention when I looked at the colleges and universities in Florida. I read on the website that it is classified as a research university and I spend far more time now doing research than I ever did as an undergraduate or graduate student. Also, I believe if any artist has the opportunity to go back inside a classroom and talk with students and educators, they should, as I think they will become better artists.”

Why are you so passionate about Shakespeare?

“Shakespeare put the English language and the magic and mystery of theatre together. To me, his 37 plays and 154 sonnets captured the 14th through 17th centuries-like a digital camera today snaps the perfect color of a butterfly’s wings in flight! How did he manage to capture almost all these colors, in human beings? Shakespeare’s plays and sonnets are about relationships during the Renaissance era. The Tragedy of King Lear, particularly, and in this work, is about the relationship between fathers and daughters. He understood that history repeats itself and brought this to the stage. His stage brought to life ‘human’ characters with complex yet recognizable personalities, something never seen on stage in the Renaissance era so dramatically and with such popularity. He knew about the Renaissance because he was a product of it. For me to present The Middle of King Lear, on stage, I have ‘become’ a product of that era as well.

Do you have any advice for aspiring performers or writers, particularly those interested in the Renaissance era?

“Be patient. It is the advice I first received as an actor from Sir Patrick Stuart at the Royal Shakespeare Company: ‘Cedric, after about twenty-five years, if you are still in the business . . . you should then be a pretty good actor.’”