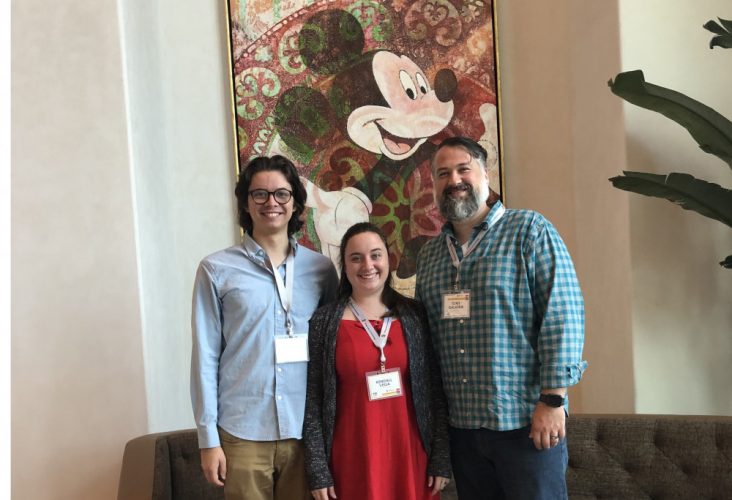 FIU Theatre Students Go Behind the Scenes at Disney Parks

Theatre students Kevin Sage and Kendall Vega, along with FIU Theatre’s Head of Design & Production, Professor Tony Galaska, got a rare look into the magic behind Disney World’s entertainment production on September 19-22.

The Disney Park Live Entertainment – United States Institute for Theatre Technology Pathway Program is a pilot program designed to give talented theatre design and technology management students a behind the scenes look at some of the country’s premier entertainment parks. FIU Theatre was one of only four schools in the nation invited to participate.

Sage, Vega, and Galaska were able to see the production side of shows in all four Disney theme parks as well as talk to the technicians and stage managers working tirelessly behind the scenes. Most of what they saw is top secret, so they were only able to share general details, but the experience is one they won’t ever forget.

Their journey started in the Magic Kingdom, touring iconic attractions like Monsters, Inc. Laugh Floor. This is a comedy show where the audience is able to interact with the projected characters. Sage and Vega were able to see the actors behind the characters putting their comedy and technical skills in action by multitasking, working with the digital boards, and making the audience laugh.

They also were able to tour Hollywood Studios’ premier nighttime show, Fantasmic. Before showtime, they were guided in climbing the show’s mountain, were shown backstage, costumes, the light shop, the effects shop, and pyrotechnics equipment.

Later that night they were able to watch the show in action, but from a vantage point few ever get to witness.

Vega was also able to watch Animal Kingdom’s Finding Nemo musical from the booth and talk to different stage managers. She learned from Epcot’s Illuminations stage manager about the planning meetings she was attending for a new show.

“Their job isn’t just calling cues,” says Vega. “It was fun and eye-opening to hear about what else they did”.

Sage, who is studying theatre lighting design, was also able to be in the tech booth for Animal Kingdom’s Festival of the Lion King.

All of the elements of the show – the lights, sets, actors – were familiar to him in terms of what any theatre show has, but the difference was the massive scale of the production. He was impressed by one of the lighting techniques involving mirrors; he noticed how a simple technique could produce grand results..

“Watching their techniques inspires me,” says Sage. “I saw them do things with light that I never knew were possible before,” says Sage, ready to apply what he learned in the future shows he will design for.

Sage also got to see Animal Kingdom’s night show, Rivers of Light. “The amount of technical work in that [show] was incredible. We got to see the way they control [the barges] and it’s really like you’re walking into a control center at NASA”.

In that show, like all Disney shows, there are a lot of different factors that the technicians have to account for such as air traffic when using lasers, and monitoring the boats via cameras.

They also got to discuss what it’s really like to work at Disney, Galaska explained. “They amazed us with their productions and showed us all of the backstage secrets and then we sat down in a classroom and they said this is how we do things here at Disney. This is the knowledge that you need to work here, this is the way it runs, this is how you can progress in the company, this is how it all gets done.”

Disney also emphasized the value they place on education. New hires at Disney have the opportunity to intern or shadow several technicians when they start out.

“Before you know it, the people that have been working there for a long time are fluent in all those different consoles because they’ve been given an opportunity to work on all of them,” says Sage. “That’s something that was really appealing about the program and the possibility of working for Disney. They really want to continue to educate you so you can be fluent not just in one thing, but many things.”

From meeting the Vice Presidents of Entertainment for DPLE for Disney World and Disneyland and talking to stage managers and designers, to watching the shows in a new way, Sage and Vega had a lot to take away with them.

“Often in theatre education, we focus on theatre in terms of, there’s an audience, there’s a proscenium, and you sit and watch the show,’ says Galaska. “But there are so many other aspects to performance and how we can apply the skills that we have to continue telling stories. It’s just a different venue, it’s a different way.” 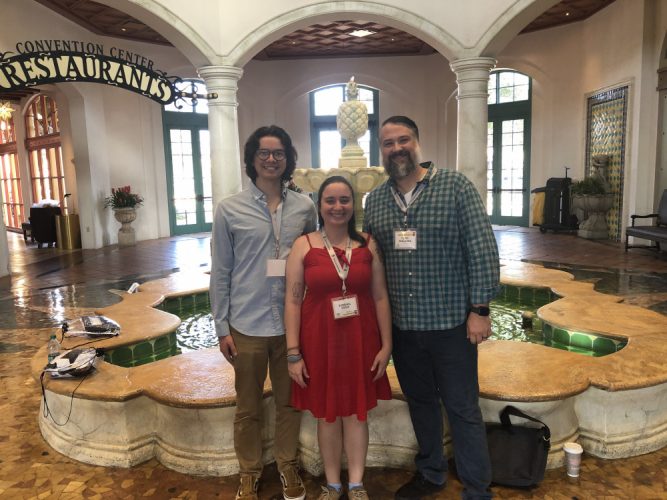