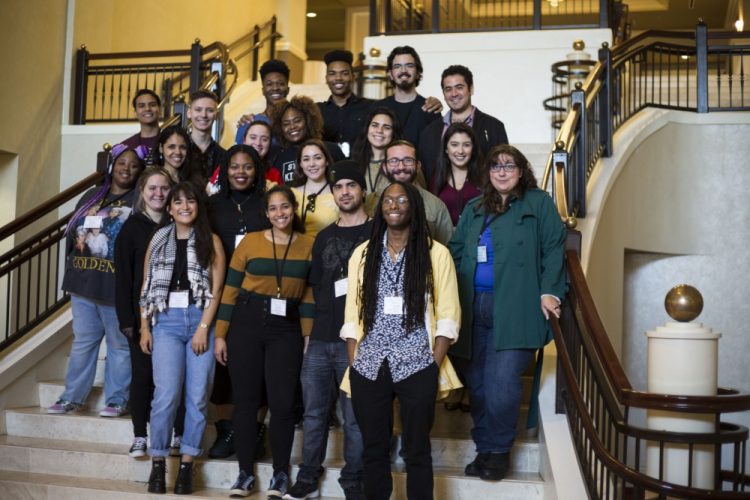 During the five day festival, students presented their work, participated in professional workshops, attended evening performances, and networked with other theatre artists from across the Southeastern United States.

Many of our students were recognized for the excellence of their work.

Jedhi Weir won the 2nd place KCACTF Award for Theatrical Design in Costume Design for his work in last semester’s A Very Old Man With Enormous Wings. He was also awarded a full scholarship to attend the Stagecraft Institute of Las Vegas this summer.

“When I heard my name called there was a moment of disbelief,” says Weir, a junior BFA costume designer. “It’s a great honor to be recognized like that and I’m grateful to my mentors, friends, and family for helping me get to this point.”

Two students also won awards for their design concepts of plays they haven’t fully realized on the stage.

Freshman Josh Gibson won the 1st place SETC/David Weiss Award for Theatrical Design Excellence for his scenic design of Between Mars and Me.

JC Gutierrez, a senior BFA Performance major, was selected as the runner up for the Stage Directors and Choreographers Fellowship. If the winner is unable to go to the National Festival in Washington DC, Gutierrez would represent region IV at the festival.

He was joined in the finals by Leonard J. Moore II. Both students prepared scenes with fellow FIU actors, presented them to professional respondents, worked on the scenes incorporating the feedback they were given, and finally presented their scenes one more time.

Four students participated in the Irene Ryan Scholarship auditions. They joined over 200 actors from across the southeastern United States who presented their work to faculty respondents through a three round process.

Anthonysha Warfield along with her partner Kyran Wright, made it to the semi-finals.

Ashley McGuire’s one-act play Koukla was one of three finalists invited to the festival. She had her play read by a cast of her fellow FIU students. McGuire was the first FIU student invited to participate in the one-act play event.

At the festival, faculty awards were also announced. Several FIU Theatre faculty members were recognized for the excellence of their work in last year’s productions.

Alumna Victoria Collado was also recognized with the Excellence in Stage Direction Award for her work as a guest director in A Very Old Man With Enormous Wings.