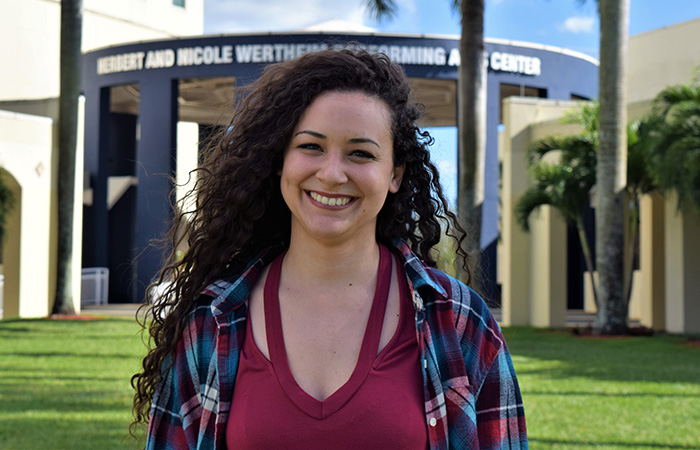 Four years ago, Luisa Rodriguez walked into Professor Tony Galaska’s office to interview for the theatre program at FIU. “I think I’m a stage manager, but I don’t really know. I’ve never been in the theatre.”

Four years later and weeks away from graduating, Rodriguez will be traveling to Washington, D.C., as the recipient of a prestigious National Stage Management Fellowship from the Kennedy Center American College Theater Festival (KCACTF).

She will be attending the national festival April 18-22 where she will meet and learn from industry leaders, tour several D.C. theaters, and network with theatre professionals from around the country.

The fellowship was awarded at the Region IV KCACTF Festival at Georgia Southern University in February. She was selected from more than 50 students from around the southeastern United States for the all-expenses paid trip to D.C.

Rodriguez was destined for a life in the arts. Her grandmother has been an actress for more than 50 years and so she grew up surrounded by artists.

As a kindergartner she tried acting, then moved on to chorus and music throughout middle school and high school.

“I never really found my niche, though,” she recalls. “I enjoyed everything creative, but I didn’t really have that fire in my belly to stay in acting or singing.”

Everything changed during her senior year at Coral Reef Senior High School. She was selected to be the “show coordinator” for the end of the year Broadway Spectacular and was tasked with organizing the entire production.

“Without knowing what I was doing, I was stage managing the entire production. I fell in love with it and knew this was what I wanted to do for the rest of my life. I googled everything I was doing and ‘stage manager’ popped up.”

At around the same time, she saw a touring production of The Lion King. She was transfixed and, knowing what she now knew about stage management, realized that someone had to be behind the scenes making the magic happen.

This newfound direction led her to FIU Theatre and Galaska’s office.

Rodriguez was instantly thrown into the fray as an assistant stage manager for Sleeping Beauty in 2013. “I had no idea what I was doing. I showed up at the first rehearsal and went from there.”

A quick study, she learned the ropes enough to be trusted with stage managing the next year. She ended up stage managing three productions at FIU: An Ideal Husband, Dead Man’s Cell Phone, and Little Shop of Horrors.

“Our stage managers learn by doing it,” Galaska says. “It’s on the job training.”

“My main responsibility is to create the most organized and safest environment so artists can thrive. They’re at their best when they only have to worry about the art and their craft. I love making that possible.”

Her involvement in the theatre department wasn’t only limited to stage managing. Rodriguez founded the local chapter of Alpha Psi Omega (APO), the national theatre honor society and served as president for two years.

“I felt like we really needed APO here at FIU. I wanted students to take ownership and foster this community of professionals who were helping each other succeed. I wanted something that would allow us to hold ourselves up to a higher standard.”

Galaska sees that drive as the crucial ingredient that has allowed Rodriguez to succeed. “She’s a leader among her classmates. She sets her goals and goes after them. When she starts something she follows through and completes it.”

When a touring production of The Lion King came through Miami again, Rodriguez took it upon herself to find out who the stage manager was and reach out. Her boldness was rewarded with a backstage tour and a behind the scenes look at the show that inspired her to pursue theatre.

“I discovered more at FIU Theatre than I ever thought I would. The design program here is far ahead from what people expect when they walk through the door. The faculty is top-notch. I was never spoon fed. They’re always here for us if we need them, but they also know we can figure it out.”

After graduating, she plans on relocating to Los Angeles, but she’s not limiting herself to theatre. To her, the skills she learned at FIU can transfer to many different mediums.