The FIU Theatre 2013-2014 Mainstage Season opens this Friday with Cardenio, an overstuffed lasagna of a play that combines layers of mismatched lovers, sexual intrigue, and Italian songs with a long-lost Shakespearean drama, to create a contemporary high-spirited, gawky romantic comedy.
Join our characters as they fall in and out of love while dancing, singing, and celebrating over the largest Italian feast ever presented on a South Florida stage. Cardenio is written by Stephen Greenblatt and Charles Mee, and directed by Michael Yawney. There will be a complimentary opening night reception 7pm in the Rotunda of the Herbert & Nicole Wertheim Performing Arts Center, with the performance beginning at 8pm. 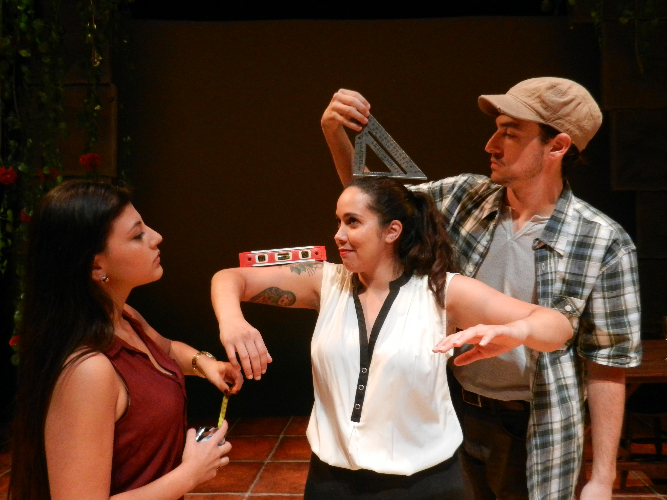 Susanna gets sized up and measured.
[In photo left to right: Juanita Castro-Ochoa as Luisa (the Groom’s mother), Chachi Colon as Susanna (the Groom’s college friend), and Daniel Leonard as Rudi (the carpenter)]

Join us for these Special Events:
– Opening Night Reception: Friday, September 27 – Pre & post-show refreshments beginning at 7PM.
– Theatre of the Mind: Sunday, September 29 – A 45-minute post show panel discussion of the ideas and topics of the play.
– Inside Scoop: Wednesday, October 2 – A 30-minute behind-the-scenes look at the making of the show led by select members of the cast and production teams. 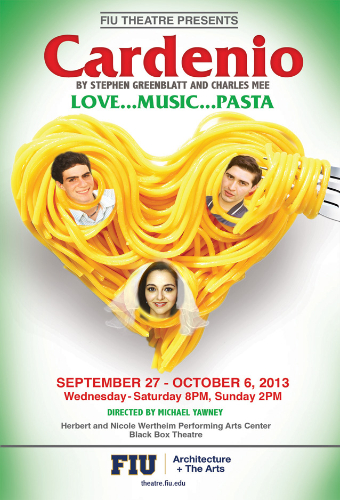