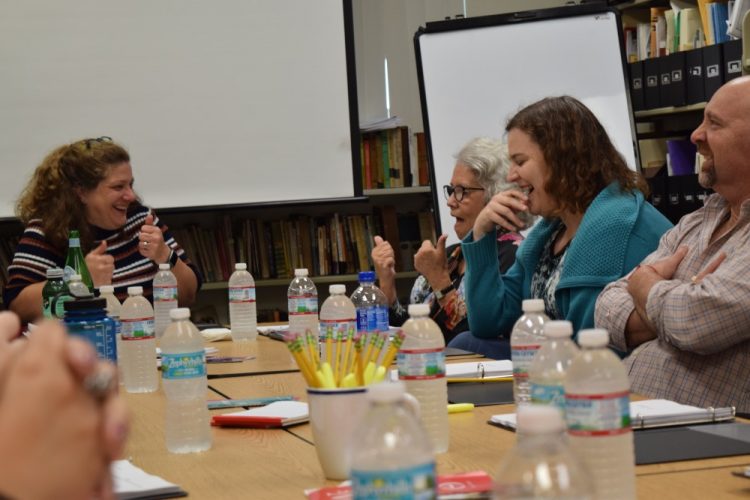 This summer FIU Theatre is launching The Greenhouse, an initiative to support professional South Florida playwrights with the development of new playscripts. Three playwrights were selected for one-week intensive residencies to workshop and revise a draft of a full-length play.

Each playwright is teamed up with a director, dramaturg, and a cast of actors. They meet three times during the week to read through the script and discuss it with the writer. Plot elements, character details, thematic issues are all up for consideration. After hearing the responses, the playwright has the opportunity to revise before the next meeting. The week culminates with a free public reading of the latest version of the script.

Andie Arthur’s play, Rev. Nathaniel’s Daughter, is the first play being workshopped this summer. It tells the story of a Unitarian Universalist Congregation in Ohio who invites an African-American lesbian to be their new minister. The congregation thinks they’re progressive (they voted for Obama), but the arrival of the new minister reveals that their comfort level isn’t quite where they thought it was.

Arthur is no stranger to the play development process. Her play has undergone several developmental workshops with Miami-Dade County Department of Cultural Affairs’ Playwrights Development Program and with the Playwrights Center in Minneapolis.

“This kind of multiple day process is such a luxury,” says Arthur, who is also the Executive Director of the South Florida Theatre League. “The actors bring a new voice to the characters and you’re hearing a lot of great feedback. Then you have a chance to go and fix things and hear it again right away. It helps the play get into a whole new space.”

The workshop is being helmed by director Margaret Ledford and dramaturg Christine Dolen, two seasoned veterans of South Florida theatre. Ledford is the Artistic Director of City Theatre at the Arsht Center. Dolen is a freelance journalist and was the theatre critic for the Miami Herald for 36 years.

“New plays are the lifeblood of theatre,” says Dolen. “They are what helps keep theatre alive and growing, reflecting our current society.”

A dramaturg is often described as a sort of play editor, but the function is wider reaching than that. Dolen’s job is help the writer structure her plot, characters, and action to reach the audience with the most impact.

“Very few plays spring from a writer’s mind 100% ready to be produced on Broadway. Programs like the Greenhouse give playwrights a chance to hear what smart actors bring to their characters and see if the points they’re trying to make are landing. It gives them more to think about as they shape the play and prepare it for production. I think it’s wonderful that FIU is undertaking this kind of project.”

Later in the summer, playwrights Betty Shamieh and Israel Garcia get their turn to develop their scripts. Shamieh’s play, Malvolio, is a sequel to Shakespeare’s Twelfth Night. Garcia’s play, Investments in Time and Money, is set in the Great Recession of a few years ago. Desperate to survive in trying times, two life-long friends betray each other and put more than just their friendship on the line.

“It’s a gift to be able to dive in and really focus on strengthening the plot and making the text stronger without the pressure of a full production,” says Garcia, who is also an adjunct instructor at FIU Theatre. “Hopefully someone hears it and says let’s put this up. That’s the ultimate goal, right?”

All performances are in the DM-150 Theatre.
For more information visit: http://go.fiu.edu/greenhousenewplay