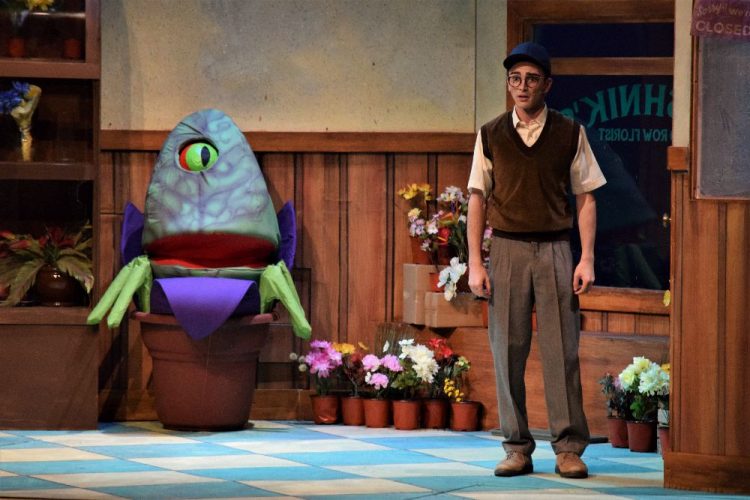 FIU Theatre kicks off the Spring 2017 season with the rock-comedy musical, Little Shop of Horrors, written by Howard Ashman with music by Alan Menken.

The show centers around a young florist’s assistant turned botanist who discovers a mutant plant with a taste for human blood – he names her Audrey II.  It was first produced as a film in 1986 and later turned into a Broadway smash hit.

BFA Performance major, Matthew Alexander, plays Seymour Krelborn, the shy and dorky botanist who discovers the mutant plant after a total eclipse of the sun and helps it grow into the giant man-eating beast.  “Five years ago I had to audition for my first musical and I was so nervous I cried,” he said.  “Its hard to believe that five years later I’m here.”

“Working with this cast has been incredible.  Everyone has given it their all since day one and it’s been a reaffirmation of what I love about this department.”

BFA Design major, Joey Ganguzza, was tasked with creating the four Audrey II puppets.  “This was by far the most challenging puppet I’ve ever had to make.”  Ganguzza started creating puppets about six years ago, but most of them were very small in scale.  Working on the Audrey II was a dream of his since he started making puppets.  “I doubted myself a lot during the process.  I didn’t think I’d be able to do it, but I’m happy with how everything turned out and I’ve learned a lot in the process.”

Ganguzza also gets an opportunity that few BFA Design majors get, performing on stage – albeit inside a giant puppet.  At one point during the show he spends an hour inside the third stage of the puppet and gets to manipulate it during some scenes.  “That’s been a lot of fun.”

Staging a musical presents a whole different set of challenges than the straight play, and it’s the first musical FIU produces since Songs for a New World in 2012.  “It was a bit overwhelming, to be honest,” said BFA Performance major, Patricia Contreras who plays Chiffon, one of the street urchins.  “It’s the first musical I’ve ever been a part of and it was a huge learning experience.  I’ve gained a lot more confidence as a singer.”

Fellow street urchin, Erynn Chapman (BFA Performance), shared the same sentiment.  “Fortunately you can get past the fear because you know it’s not just you up there.  You have a team with you and you just have to listen to and connect with each other.”

Little Shop also presents major challenges backstage with a dizzying amount of set and costume changes.  BFA Performance major, Robert Ayala, plays five characters in the show – three of them in rapid succession.  During one stretch of the show he has three full costume changes that must be done in under 30 seconds.  “I’m running on a lot of adrenaline during those changes, but I have to ground myself and stay calm.  When the change is done, I step out as a new person.  That’s a lot of fun.”

Little Shop of Horrors runs until Sunday, February 5th at the Wertheim Performing Arts Center on the Modesto Maidique campus of FIU.  For tickets and information visit http://go.fiu.edu/littleshop or call the theatre box office at 305-348-0548. 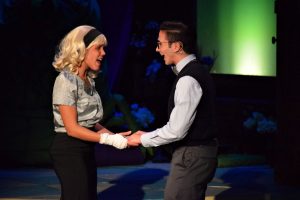 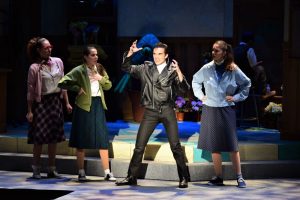 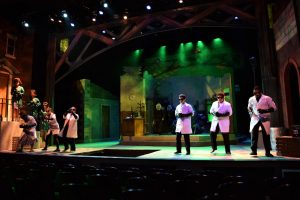