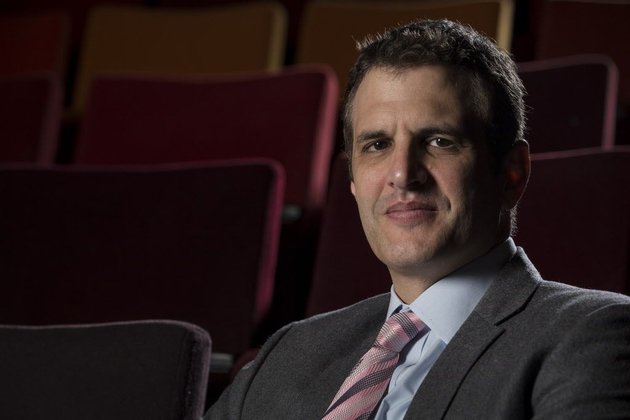 The following article was written by Graydon Royce and is available by clicking here.

From one Joe to another. Joseph Haj will succeed Joe Dowling as artistic director of the Guthrie Theater.

Haj, 51, is the eighth artistic director since legendary Broadway director Tyrone Guthrie founded the company — one of the nation’s largest regional theaters — in 1963. He will assume the job July 1, when Dowling steps down after 20 years — by far the longest tenure of any of the theater’s leaders.

“It is genuinely humbling in the extreme to come to this line of astonishing artistic directors, each in their own way.”

Haj, selected after a year-long search, is producing artistic director of PlayMakers Repertory Company at the University of North Carolina. The Chapel Hill-based troupe operates on a similar model as American Repertory Theatre at Harvard or the McCarter Center at Princeton, residing within the university’s Center for Dramatic Art.

When he took the helm in 2006, PlayMakers had posted deficits in 16 of the 18 previous years and proposed cutting back to four productions a year, from five. Haj boosted the annual budget to $2.8 million, from $1.6 million by producing about 10 productions a year. He operates two stages — a 500-seat thrust and a 265-seat flexible space.

“PlayMakers was invisible nationally and audience was falling off,” he said. “We were able to galvanize people in the organization and lift the artistic bar.”

Haj is one of a handful of Arab-American artistic directors working in American theater. His parents were Palestinian immigrants.

A New Jersey native, he grew up in Miami and after earning an MFA at North Carolina pursued an acting career that brought him to the Guthrie in 1989 and 1990. His first role was in director JoAnne Akalaitas’ production of “The Screens.”

He, Akalaitas, and directors Anne Bogart and Robert Woodruff went to the West Bank and Gaza to do theater workshops with young Palestinians and Israelis during the second intifadah.

At the Guthrie, Haj assumes a company that is 10 times larger by annual budget than PlayMakers — and about twice as large in terms of number of productions each season.

Dowling has been the single leader since former managing director Thomas Proehl left the company in 2006. Much speculation has centered on whether the theater needs a strong second in command. Haj assumed a structure at PlayMakers that is similar to the current Guthrie leadership model. Within a few years, he had hired a managing director to report to him. He would not say Monday whether he plans to make a similar change here.

“There’s a senior staff that is good at their jobs and it would be silly to tinker under the hood before I get a chance to see how things work,” he said. “I’ll leave it like it is in the near term.”

Haj’s theatrical tastes are eclectic of necessity. The company is the only major regional theater between Atlanta and Washington.D.C. so it must be many things to audiences.

“I love Shakespeare, I love a Lisa Kron play, I love a great musical, I love work of traditional theater makers and I love devised work [built by ensemble], work we don’t understand,” he said. “How we champion artists on the edge is important.”

Haj, who currently is directing “Pericles” at Oregon Shakespeare Company, will work with Dowling over the next several months on planning the 2015-16 season. Several pieces of the puzzle are in place, or have been in the pipeline for a long time. Still, he expects that when the season is announced, “It will reflect a lot of my contribution.”

Haj spoke of the need for a theater to be nimble, which could be a stumbling block with a large organization such as the Guthrie.

“Large institutions are like ocean liners,” he said, frankly. “We have trouble being responsive. The Guthrie can be more responsive to what’s going on in the world.”

The Guthrie has one of the largest annual budgets among regional playhouses and attendance last year was just under 360,000. Since moving into a three-stage complex in 2006, the company has faced pressure associated with the costs of running a huge building, which has provoked some programming that cause observers to wonder if economics, rather than art, is driving decisions.

Haj demurred when asked what he sees as the theater’s greatest challenges.

“For me to come in flailing my arms and saying, ‘This is what the Guthrie needs’ doesn’t make sense. I simply don’t know enough yet.”