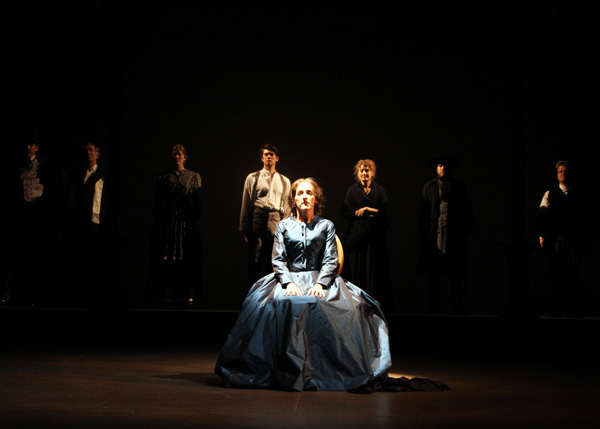 Tony Galaska designed the lighting for the current production of “A Most Dangerous Woman” by Cathy Templesman, directed by Richard Maltby, Jr. at The Shakespeare Theatre of New Jersey.

We spoke with him about this work he told us about his relationship with the Shakespeare Theatre of New Jersey (STNJ) “It’s getting to 8 years of my life that I’ve shared with them.” “Looking back on the memories, there were rough times [after an accident where he broke his leg] but there were fun times,” saying that even setting the lighting for a show while rolling around on stage in a wheelchair while challenging was engaging.

“There is a strong sense of community” that brings him back every year, as well as the great work that the company continually produces.

He was brought back after his first year, after presenting his portfolio. Many others move through the ranks, beginning in the professional training then hired as crew. The company likes to do this, they are proud of their people.

The main experience he brings from nearly a decade with the company back into the classroom is time management. How important it is to manage time properly “you have to be ready to go, know where to be” it reminds him to bring what a “working environment really is, first hand, trusting the knowledge [of design] and background” back into the class room. The productions the company produces “have a lot on the line” large crowds, New York Times reviewers, and more – which means everyone is on the top of their game.

The company also focuses on education, their summer professional training program trained FIU Theatre student Dong Truong and two recent grads, Katherine Paez and Liza Perez – Liza is the lighting designer for our first show of the 2013-2014 season – CARDENIO in the WPAC Black Box (mentioned in this earlier article). During their internship interns are often also taking classes and workshops during their time with the company. Most of the technical and design students are learning hands on, in the field, working with seasoned professionals who also offer portfolio reviews and resume workshops for the students. Brian Crow is the STNJ educational director. More info here: shakespearenj.org and in this TCG article.

Here are some photos of Tony’s work with the Shakespeare Theatre of New Jersey: