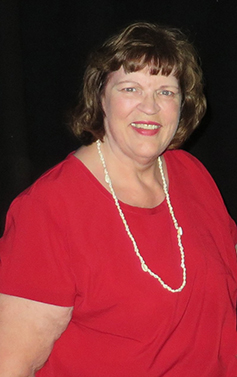 In today’s workforce, it is extremely unusual for someone to work in the same place for as long as 32 years, but that is just what our departing Chairperson has done.  The Theatre Department wishes our rare gem, Marilyn, a very Happy Retirement.  Her contributions to the Department have been great, and everyone is sad to see her leave after her 32 year tenure.

Upon receiving her BA from the University of Northern Iowa (Class of ’67), Marilyn taught high school in a special pilot program in McHenry, Illinois for five years, after which, she left to work on a Master’s degree at Schiller College in Berlin, Germany, where she earned an MA (Class of ’74) in Theatre Arts.  Upon her return to the States she spent a year as the resident costume designer at the Regent Theatre in Syracuse, NY, before accepting a position at Vassar College where she worked for five years as a professional staff designer and costumer in the Theatre Department.  She continued her education at Columbia University, earning an M.Ph. (Class of ’80).  During her time in New York City she taught classes at Columbia College, Barnard College and the University of Pennsylvania.  She also worked as a freelance designer, creating costumes for two professional dance companies in the city, the Omega Company (Carla DeSola, Artistic Director) and the New York Baroque Dance Company (Catherine Turocy, Artistic Director).  She also worked as a draper in the costume shop of the New York Shakespeare Festival, working with world class designers such as Rubin Teratunion and Santo LoQuasto and dressing such stars as Meryl Streep and Sam Waterston.  In 1982, Marilyn joined the FIU family as a visiting Assistant Professor.  After receiving tenure and promotion to Associate Professor she served as the Department of Theatre and Dance Chairperson (1989 to 1991).  This is her second term as Chairperson to the department (2010 – present).  Among her many other accomplishments at FIU, she served as the Chairperson of the College of Arts & Sciences Curriculum for several years.

During her time at FIU Marilyn has continued to design professionally, earning a Carbonell nomination for her costumes for the South Florida Shakespeare Festival’s productions of Hamlet and Rosencrantz and Guildenstern are Dead, as well as designing costumes for Momentum Dance Company (Delma Iles, Artistic Director) since 1986, and Dance Now! Miami (Hannah Baumgarten and Diego Salterini, Artistic Directors) since 2008, along with several other organizations over the years.

Marilyn is well respected by her colleagues and staff and loved by her students.  It is common knowledge that she expects and demands a lot from staff and students alike.  She accepts nothing but the best from those around her.  As a result of these expectations, everyone puts tremendous effort into their work and strives to perfect their productions, assignments, costumes etc.

Brian Schriner, Dean of the College of Architecture + The Arts, appreciates his dear friend’s tireless devotion to FIU and the Department of Theatre’s students and faculty.  He has great respect for her vision, leadership and management.  He notes that Marilyn was instrumental in the creation of partnerships with Royal Caribbean Cruise Lines, Gables Stage and Coconut Grove Playhouse.

Ivan Lopez (Class of ’04) admits that he knew nothing about theatre when he decided to take a Modern Dramatic Literature class with Marilyn.  Not only did that class make him fall in love with theatre, but he is currently teaching said class as an adjunct professor in the Theatre Department.  He was particularly inspired by her dialogical pedagoge, which portrayed her own love for the theatre, and accredits his career choice to her. “I have a great relationship with her and will always consider her more than my boss.  I am grateful to her for giving me this opportunity and I feel very blessed and fortunate that she has trusted me to teach this particular class.”

Charles Sothers, Theatre Arts and Program Director of the Roxy Theatre Group, has known Marilyn since 1996.  As her student, he recalls she always expected the best quality work from her students.  “Marilyn instills fear in her students.  We are not as afraid of her personality as we are of disappointing her, because she is like a mother figure.”  At the Roxy Theatre, he finds himself referencing her when he has to make a decision, “Is this Marilyn Approved?”  Both Charlie and his wife Ana credit the structure and standards they have at the Roxy to the foundation they got from FIU, and Marilyn.

Marina Pareja (Class of ’98) has known Marilyn for almost 18 years.  Marilyn was her professor, mentor, boss and friend.  They have a great working relationship because Marina can almost anticipate what Marilyn needs before she asks.  This ‘telepathic’ connection allows her to always be prepared.  She views Marilyn’s departure as bittersweet, “Knowing that she was always close by if I needed help or advice has always been comforting, but she has paid her dues and deserves this.  Although I am sad to see her leave, Marilyn has worked very hard to help the department evolve into what it is today and I wish her the best.”

Paulette Rivera, the department’s Fiscal Assistant and Marianna Murray, the Office Manager both work closely with Marilyn on a daily basis.  They consider her to be a fair and compassionate supervisor.  Paulette will miss driving Marilyn around in the golf cart.  On those short drives around campus, they got to know each other on a personal level.  Marianna will miss their ‘special lunches,’ where they got away from the office and had the opportunity to talk about things unrelated to work.

There is no doubt that Marilyn has touched many lives and her presence will be missed.  “Farewell Marilyn. We all wish you a stress-free retirement, full of happiness.”