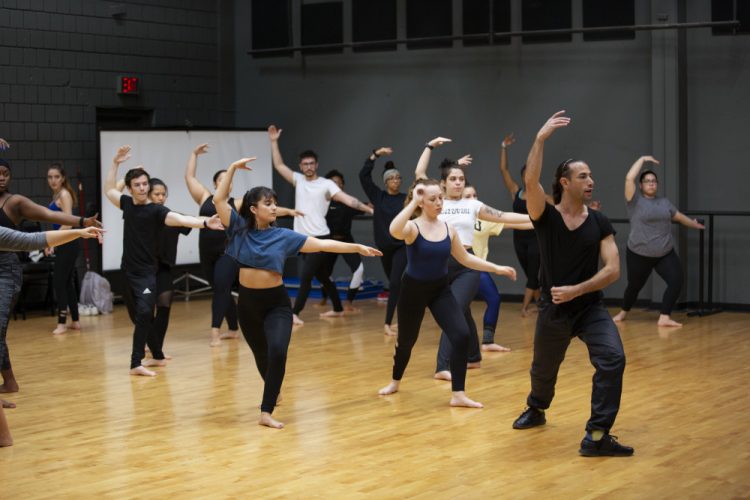 Faculty member, Pioneer Winter, has set the bar even higher for the FIU Theatre Department once again.

Holding a Master of Public Health and Epidemiology from FIU and a Master of Fine Arts in Choreography from Jacksonville University/White Oak, Winter was the first artist to be named a Dennis R. Washington Achievement Scholar.

Winter has made a name for himself not only in the FIU community, but throughout the performance world. He is a Dance Miami Choreographic Program recipient (2014-2015; 2017-2018), a Diversity and Inclusion Awardee and a Miami Goes Elsewhere Fellowship recipient (2016). Pioneer Winter has been festival director of ScreenDance Miami Festival since 2016 and he was awarded a commission and residency for the inaugural season of the MDC Live Arts Lab Alliance (2017-2019). His films’ works have been screened internationally, including the United States, Canada, Spain, Germany, and the United Kingdom. Winter was also recently recognized by Dance Magazine as part of the “25 to Watch” in 2019.

Winter’s talents go beyond the stage and have made their way into the classroom. In 2014, he joined the Panther family and became a faculty member with the FIU Honors College Department. In 2018, he became a faculty member for the Department of Theatre and the coordinator for dance minors. He also teaches areas of social justice and art, epistemology, and dance here at FIU.

Winter has added yet another set of accomplishments to his list after being awarded a grant by the 2019 MAP Fund out of 42 winners, as well as a grant from the New England Foundation for the Arts, out of 20 winners, for his Birds of Paradise performance project. Winter gives credit to the Dance Magazine for assisting in his selection for both grants.

“Receiving the grants does a lot because even though the company is successful here in South Florida, we have the support needed to tour nationally,” said Winter.

Winter is also the director of the Pioneer Winter Collective, a performance company that has a reputation for shedding light on societal issues – which is exactly what Birds of Paradise does.

Birds of Paradise is a new ensemble-driven performance work by Pioneer Winter Collective, enacted in the form of a tropical militia. “It interrogates agency, power, celebration and rage through a lens that draws imagery from military and pride marches, drag pageantry and radical forms of assemblage…Birds of Paradise uses the memory of these events as embodied landmarks and impetus for a dance-theater work aiming to gain control over both the story and rhythm by which we march – or fly.”

In the entertainment industry, southern states are “under-represented,” and Birds of Paradise, is the only Florida winner of the NEFA grant.

When our employees succeed, FIU succeeds. Congratulations, Pioneer Winter! You truly are Worlds Ahead.