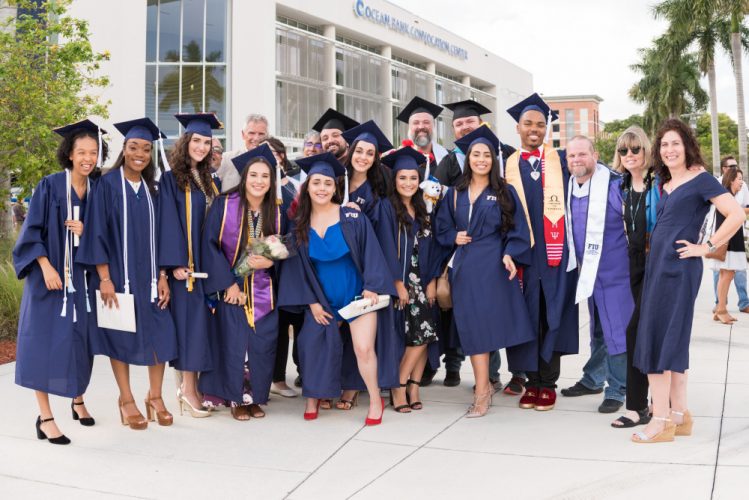 On Wednesday afternoon, 18 FIU Theatre students officially became graduates at the Spring 2019 Commencement. With their professors, families, and friends in attendance they walked across the stage, shook President Mark B. Rosenberg’s hand, and brought their college careers to a close.

Apriah Williams was recognized as a Worlds Ahead Graduate. She was one of four students among the hundreds of graduates in the College of Communication, Architecture + The Arts recognized with that distinction.

President Rosenberg asked her to rise as he recounted Williams’ accomplishments. When she entered FIU, she had no experience in theatre. Two years later she was recognized by the Kennedy Center American College Theatre Festival with the National Award for Theatrical Design for her scenic design of Ubu Rex.

Next up for Williams, she will move to the west coast to pursue her Master of Fine Arts in Technical Direction at the California Institute of the Arts (CalArts).

Another graduate, Natalia Quintero-Riestra, will also be heading to California to pursue her MFA in Acting at the University of California San Diego (UCSD).

Among the graduates, many of them graduated with distinction.

Leonard J. Moore, II received two degrees. Along with his BFA in Theatre he received a Bachelor of Arts in Psychology.