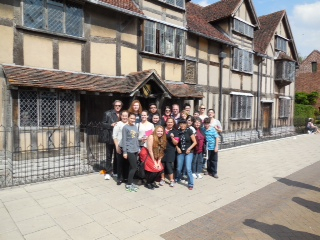 The Department of Theatre is pleased to announce its annual Shakespeare in Stratford/London: Text & Performance Study Abroad Program.

ABOUT THE PROGRAM
“Shakespeare-in-Stratford & London: Performance & Beyond” explores the summer repertoire of the Royal Shakespeare Company. The RSC has set the gold standard for productions of Shakespeare’s plays for more than one hundred years. All plays will be studied at FIU prior to departure. Participants attend productions at the Rose Theatre and Swan Theatre in Stratford and the famed Globe Theatre on London’s South Bank. The 2015 season includes Othello, A Midsummer Night’s Dream, Merchant of Venice, and Volpone, written by Shakespeare contemporary, Ben Jonson. Each production provides afternoon pre-show lectures conducted by eminent scholars from the Shakespeare Birthplace Trust in conjunction with the University of Birmingham. Featured RSC actors join participants for a morning-after post-production discussion in which they share personal perspectives on such production elements as rehearsal process, character development, and play’s themes and issues. An RSC Associate Director will lead the group in a directing workshop.