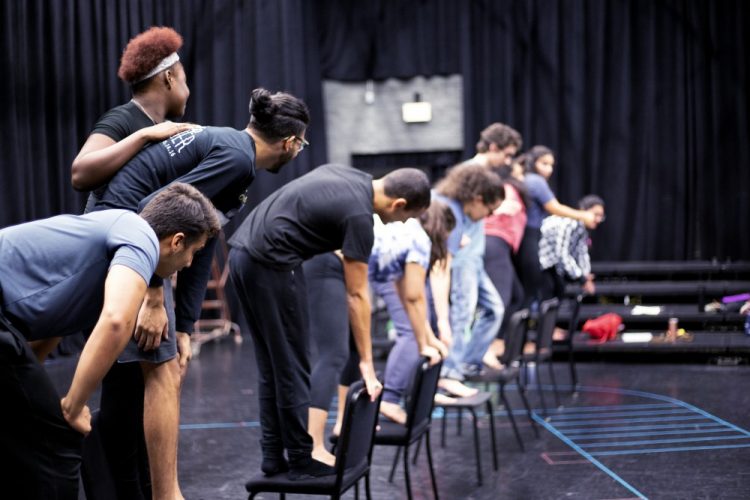 “It’s a bit surreal, coming back home to the place where I learned about theatre,” says FIU Theatre alumna Victoria Collado.

Six years ago, she was a new graduate heading out into the professional theatre world. Now Collado returns as the guest director of A Very Old Man With Enormous Wings, which kicks off the 2018-19 season.

“I suddenly feel like the grown up in the room. As a student I was guided, but now I step in there and have to be that guide. There’s a weird sense of freedom and responsibility.”

Collado graduated with a BFA in acting, but quickly discovered her true passion was directing. Her ascent in the world of directing has been a quick one. Last year, she was the assistant director of John Leguizamo’s Latin History for Morons on Broadway.

Since the experience of being a theatre student is still fresh in her mind, she understands the challenges her cast faces as they go from the classroom to the stage.

“There’s a bit of a mind shift going from working on monologues or scenes in class to working on a play with 10 other people,” she says. “The play will only work if everyone is working as a team and really listening to and feeding off of each other. That’s why we spent a lot of time working on building that ensemble in the first week.”

The rehearsal process is a time of discovery for actors. Beyond memorizing lines and knowing where to move on stage, they have to discover what’s going on underneath the words. In a play like this one that can be extra challenging.

The play was written by Pulitzer Prize winner Nilo Cruz and is based on a short story by Latin America’s most celebrated writer, Gabriel Garcia Marquez — winner of the Nobel Prize in Literature. It’s a magical story with characters who are larger than life.

Senior Rachel Gil de Gibaja plays the Man in the Panama Hat, a character who is seemingly outside of the world of the play and serves as the narrator, speaking directly to the audience.

“I initially thought of the character as this suave guy who wears a panama hat, but through the process I’ve been discovering that there’s something more vulnerable,” says Gil de Gibaja. “Yes, I’m this omnipotent being that doesn’t exist on the same plane of reality as the rest of the characters, but I still have wants and needs. I can’t just be Mr. Suave. I have to go deeper than that. I haven’t found him yet, but I’m looking.”

Since the start of the semester four weeks ago, the cast has been meeting in the theatre every single night for three hours of rehearsal. And the work doesn’t end there. In between classes and at home, they work on drilling their lines and getting the show’s choreography into their bodies.

“Choreography doesn’t come naturally to me,” says Carlos Jara, a senior. “It takes me a while to really find that rhythm in my body. So for me the rehearsal doesn’t end at 10. When I go home, I have to work on it, so when I come back the next day, I’ve improved, and I’m not holding anyone else or myself back.”

“The biggest challenge has been distinguishing between all of them,” says Sanghavi. “They’re all different people. I’m still searching for the answers to a lot of questions. How do they move? How do they talk? Where are they coming from? What do they want? Do they still have hope? The moment I find those answers I know I’ll be able to change into different people.”

“A Very Old Man With Enormous Wings” opens Friday, Sept. 28, at 8 p.m. at the Wertheim Performing Arts Center. The show runs for eight performances through Sunday, Oct. 7. Get your tickets today.