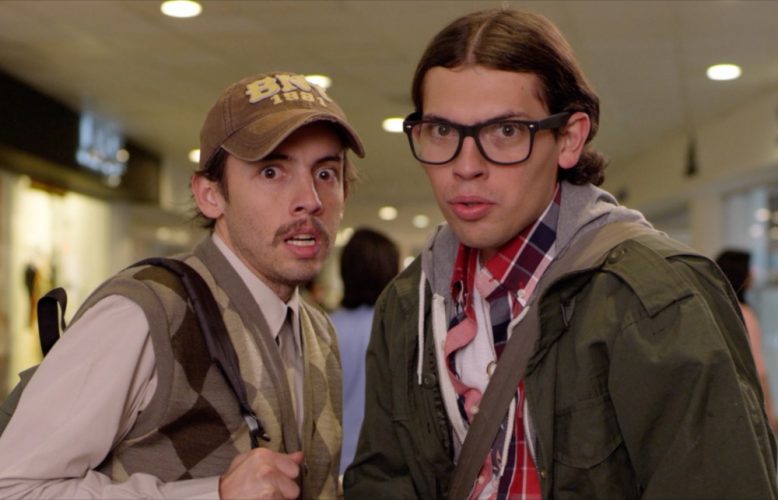 FIU Theatre alumnus Yecid Benavides Jr. ’05 will be returning to his alma mater on Saturday, Feb. 3 to screen his feature-length romantic comedy, Engaño a Primera Vista, at the Wertheim Performing Arts Center.

Benavides produced, wrote, directed and starred in the film with his brother, Johanan. It was a smash hit in Bolivia, becoming their country’s highest grossing film of the last 10 years and making the brothers overnight sensations.

Benavides’ success didn’t just happen overnight though. His is a story of persistence and patience.

Even while he was studying acting at FIU as a theatre major, his ambitions lay in film. He didn’t just want to be in movies though…he wanted to make them. “I just knew that’s what I wanted to do,” Benavides says.

In the classroom, he was acting, writing, breaking down scripts and learning the basics of storytelling. But his education didn’t stop there. On his own time, he was working on personal projects as best he could, borrowing cameras and doing his best to recreate the kinds of shots he was seeing in professional films.

That proved to be a tough task on zero budget. Many of the smooth moving shots the pros make are shot with Steadicams – a stabilizer worn by camera operators. Since he couldn’t afford to even rent one, he learned how the Steadicam worked and set out to build his own.

During one of his summers back in Bolivia, with the help of his father – Yecid Benavides Sr., a mechanical engineer with a degree from the University of Miami – he built the prototypes for what they’d later manufacture and sell as the Cineglide.

Professor Phillip M. Church noticed Benavides’s drive in his Intro to Film class. “It was clear even back then that Yecid was destined for a career in film,” he says. “He had a passion and enthusiasm for film that made him quite focused and determined. I’m not surprised he’s enjoyed such success.”

After graduating, Benavides returned home to focus on growing the family’s new film company, Artistas Latinos. They wanted to make films but didn’t have the money or equipment to do so. “We didn’t want to wait for it to come to us. We were going to make it happen,” he says.

They started building other machines and equipment they’d need like dollies and remote-control jib arms, then bought a prosumer HDV camera and started working on different productions.

When international crews came through Bolivia, they hired the brothers as local producers. They worked on shoots for Discovery Channel, National Geographic, History Channel and Travel Channel.

But their company was seen as a rental house, and they were viewed as production people. “We wanted to be seen as creatives.”

So in 2011, they produced and directed a short film, Desconexion, a thriller that proved they could shoot a professional film. It was successful on the film festival circuit.

The brothers started making commercials and music videos to raise money for the feature films they were planning.

Finally, in 2015 they decided they didn’t want to wait any longer. “We were tired of excuses. We knew it was time to make our feature,” Benavides says.

All their scripts were too complicated and too expensive. They gave themselves a week to brainstorm and arrive at a new film – something that was easy to shoot and would make good box office.

“We didn’t want to go back after this one. We wanted to continue making our movies,” he adds.

And they wanted to act, something Johanan hadn’t done before.

On the very first day of their brainstorming week, their father (a producer on the film along with his wife Viktoriia) came up with the premise.

Two broke nerdy brothers desperately want a brand-new MacBook Pro. Their bully friends decide to have fun by promising to buy them the laptop of their dreams if they can get two extremely sexy women to give them a kiss by Friday. The brothers, who’ve never had girlfriends, set out to (awkwardly) win their prize.

When the film premiered on Sept. 6, 2016, it was an instant hit, making them national celebrities. “It went like wildfire. People were flocking to the theatres for months,” Benavides says.

The film’s success then started gaining attention outside of Bolivia. In 2017, it came on a U.S. tour to Washington, D.C., and Virginia. Soon it will hit theatres in many Latin American countries like Chile, Peru, Argentina, Paraguay and Uruguay.

The film is a bit of surprise for international audiences. “When most people think of Bolivia, they think of small villages in the mountains. But we’re more than that. We’ve got modern cities. We’ve got technology. We’ve got nerds and geeks,” Benavides says.

They’re currently in development on their next project, a bilingual art heist film. Their goals are as ambitious as ever. They want to follow in the footsteps of fellow Latino filmmakers Alfonso Cuarón, Guillermo del Toro and Alejandro González Iñárritu, “with Gael Garcia Bernal and Diego Luna thrown in there since we want to act,” he says.

Benavides is also thrilled to come back to his alma mater and screen his film in a theatre he performed in more than  a decade ago as a young college student.

“I’m excited to come back and share something I did – something I’m proud of – with my teachers and the students whose shoes I was once in,” he says “I want to be an example of a success story and share the mentality that got us there.”

Engaño a Primera Vista will screen at the Wertheim Performing Arts Center on Saturday, Feb. 3 at 8 pm. A talkback with Benavides will follow the screening. The film is in Spanish with English subtitles.

The screening is free and open to the public. Seating is extremely limited, you may reserve your tickets here.