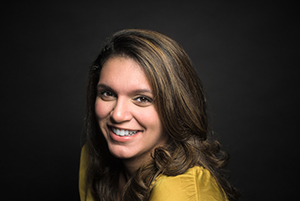 Victoria Collado (Class of ’12) never imagined that she would be in New York City directing for a theatre house like Repertorio Español, but that is exactly what this BFA performance alumna is currently doing. When Victoria graduated two years ago, she chose to stay in Miami where she wrote, directed and performed for Micro Theatre Miami, collaborated with fellow graduates Melissa Ann Hubicsak and Michelle Antelo at The JQ Studio and worked for ArtSpoken Performing Arts Center in Little Havana.  Then, in 2013, Victoria decided to enter the New York International Fringe Festival (described as “the largest multi-arts festival in North America, with more than 200 companies from all over the world performing for 16 days in more than 20 venues”).  She hoped that her show about famous Cuban singer La Lupe would be selected. While it unfortunately was not, she was offered a job as venue manager for the festival!  The employment brought her to New York for two months, after which she received an internship with the Brooklyn Academy of Music, where she had the advantage of being exposed to many companies and opportunities.  Taking the advice of her former professor Michael Yawney, she applied to the Repertorio Español, an Hispanic-based company founded in 1968 whose mission is to use distinctive, quality productions to introduce the best of Latin American, Spanish and Hispanic-American theatre to broad audiences in New York City and across the country, most especially to seniors and students of all ethnic backgrounds.

For all her hard work and perseverance Vicky was recently awarded a prestigious Van Lier Young Director’s Fellowship. The Van Lier Young Director’s Fellowship was designed with the intention of nurturing the talent of emerging Hispanic directors in New York City.  Winners direct two performances, one contemporary and one from Spain’s “golden age,” over two summers.  The Fellowship is a fortuitous opportunity for individuals to gain experience, network with working professionals in the field and develop a palate for the diversity which makes up the Latin community on the east coast.  She just finished directing her first show, El Cruce Sobre el Niagara, a contemporary piece, which received generous reviews in the Spanish community, and is about to begin doing research for the second show, which will open in 2015. Through the winning of this award Vicky has proved that perseverance and determination really do get rewarded.

Like many of our students, Victoria attributes a great deal of her success to the foundation she was given at FIU, saying that “the job that brought me to New York was not the job I was looking for, but when the opportunity presented itself, I realized that FIU taught me more than simply how to be an actor.  I took design classes, I learned how to operate the light board, I worked as a stage hand and a stage manager AND I was taught how to be a performer at FIU.  I got a complete education, which prepared me for a future in theater.”  She is particularly thankful to faculty member Michael Yawney for his continued advice and encouragement.

Victoria has also connected with a group FIU Theatre alumni residing in New York, and together they have formed a multimedia production company called 3TO5.  “The company is set on creating, developing and showcasing the work of talented artists, be it through film, theater or web based platforms.  3TO5 strives to produce original work; the kind that artists themselves want to see.”  When she is not working at her regular job, she is busy collaborating with her former classmates on a variety of projects such as short films and web series.

When asked if she had any advice for current theatre students, she had this to say, “Another person’s journey is not your destiny, so go at your own pace and don’t give up, even when you feel discouraged.  Try to make your own work whenever possible.”

The Theatre Department wishes Victoria continued success as she pursues her dreams.

To learn more about the Repertorio Español, click here