This year’s Alternative Theatre Festival is being hailed by Theatre Chair Marylin Skow as a “Summer of  Alumni Giveback”. Alumni contacted the department about wanting to come back to perform on our stage as fundraisers for our Theatre Student Scholarship Fund. She happily obliged.

The Alternative Theatre Festival opens with the Alumni Showcase and closes with a reunion of the 2002 cast of Glengarry Glen Ross (August 8, 9, 10). All performances are at 8:00 p.m. at the Herbert and Nicole Wertheim Performing Arts Center.

THE EDUCATION OF JEFF RODRIGUEZ
When desperate times call for desperate measures, what happens when those desperate measures go desperately wrong?  In THE EDUCATION OF JEFF RODRIGUEZ, a gifted but reclusive adolescent realizes there is more, and less, than meets the eye when it comes to himself and the adults in his life.  Seeking to escape their individual “quagmires”, they become entangled in a self-created web of crime and deceit.

A staged reading of this new play by Joshua Martel will be performed on Thursday, June 20 in the Black Box Theatre in the Herbert and Nicole Wertheim Performing Arts Center.

SCRIPT?  WHAT SCRIPT? An Evening of Long Form Improvisation Comedy
You may think you know about improvisation—short skits that last five hilarious minutes.   But what happens when you extend the unexpected antics and laughs for fifteen minutes?  Twenty minutes?  A half hour?  Welcome to Long Form Improv!  In this evening, led by Ozzie Quintana of IMPROMEDY, FIU Theatre alumni team up with the improv veteran to explore the one art that is truly the actor’s, and the actor’s only.  No director, no writer;  working off simple suggestions from the audience these performers “jump off the high dive” and go by their immediate impulses to create fresh, original (and zany) stories.

Performance on Friday, June 21 in the Black Box Theatre in the Herbert and Nicole Wertheim Performing Arts Center.

GET YOUR SHORTS ON!  An Evening of Original Short Plays
In the past ten years, South Florida has produced some nationally and internationally recognized playwrights such as Tarrel Alvin McCrany, Nilo Cruz, Teo Castellanos and Michael McKeever.   This tradition continues to grow with many passionate Miami artists writing and producing their own works.  In this evening of short plays FIU Theatre alumni come back to perform their creations, exposing the plethora of storytelling talent FIU has generated both onstage and behind the pen.

Performance on Saturday, June 22 at the Black Box Theatre in the Herbert and Nicole Wertheim Performing Arts Center. 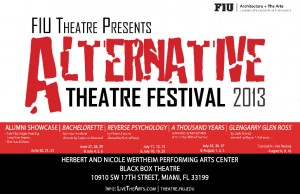 The Alumni Showcase weekend will feature Alumni including:

Israel (Izzy) Garcia – Izzy is very proud of his experience with FIU’s Theatre department.  In his undergrad years, he studied under Phillip Church and participated in various productions including NOISES OFF, COMEDY OF ERRORS, and NO EXIT.  He currently teaches acting and theatre appreciation at FIU, and has been doing so since 1996.  He has made a living as a theatre arts educator working with Miami Dade County Public Schools, Miami Dade College and FIU as well as other institutions.  He has also been professionally active in South Florida theatre, acting at Actor’s Playhouse, Palm Beach Playhouse, and New Theatre.  Acting credits also include several small television commercials and “a nice big juicy” speaking role on BURN NOTICE.  Awards include The Silver Palm Award for Performance, The New Theatre Award for Best Actor (twice), and nominations for the Carbonell Awards.  Most recently, he received the Excellence in Teaching Award at FIU.  He is married to Giselle Benitez, his college sweetheart, and they have two very wonderful daughters, Giovanna and Karina.  Somehow, he manages to sleep once in a while.  He also is the family cook – just ask his wife.

Fabián Cárdenas – Fabián was born and raised in Ecuador. His training as an actor began in Quito with the Malayerba ensemble, an internationally renowned experimental theatre group. He moved to Miami eleven years ago and continued his theatre education at Florida International University along with film training at Miami Dade College.   In 2005, he toured with the Boston Flamenco Ballet company throughout the eastern and mid-western U.S. performing plays in both English and Spanish – Don Quixote of La Mancha, and Cyrano de Bergerac (Christian). In addition to the tour, and throughout his theatre career, Fabián has had the opportunity to portray many other challenging and diverse characters such as Demetrio in Midsummer Night’s Dream, Mercutio in Romeo and Juliet, Gabriel (Treplev) in a Spanish language adaptation of Chekov’s The Seagull, and Alan in the original work Marea Roja.   Fabián is the founder and artistic director of Dream Theatre Productions (DTP), a non-profit company, and Cinema 360, a film and video production organization. Through DTP, he has produced and directed theatrical productions for the past five years. Fabián has also furthered his acting career through his involvement with several innovative new projects such as the short film Chamber Made and skits with the web comedy troupe People Off Color.

Marina Catalán – Marina is a Miami based Chilean Actor, who has appeared in Telemundo, Televisa, and Venevision soap operas, as well as commercials and theatre plays. She earned her Associate degree in Drama from Miami Dade College and her Bachelor of Fine Arts degree in Theatre Performance from Florida International University (2011). You can view more of her work at www.marinacatalan.com

Rey Dabalsa – Rey earned a Bachelor’s degree in Theatre Arts from Florida International University in 1996.  During his university years he was prominently involved in the Miami theatre scene both as an actor and playwright.  As an actor he’s held prominent roles in plays by everyone from Checkov to Shakespeare to Kushner. As a playwright he’s had three of his short plays produced. Upon graduation, he moved to New York City where he lived and acted for two years.  When he made the decision to return to Miami, he immediately entered the education arena as a high school Drama and English teacher. Theatre remains an active part of his life. He is a theatre critic for an online magazine and continues to write plays in his spare time.

Juan Espinosa – Juan  graduated with a Bachelors of Fine Arts in Acting from FIU Theatre. His FIU acting credits include Romeo & Juliet (Cleric), Metamorphoses (Vertumnus), Balm In Gilead (Martin), Midsummer Night’s Dream (Bottom), Anna In The Tropics (Juan Julian), Proof (Robert) & A Funny Thing Happened On The Way To The Forum (Hysterium). He also wrote and starred in an original one-man production titled Incorrigible: The Babe Ruth Story. He has been a public school drama teacher for the past five years and is looking forward to educating and inspiring young actors for many years to come. He is infinitely grateful to the FIU Theatre department for exposing him to a rich education, for allowing him to make lifelong friends and most importantly for the unforgettable opportunity to find the love his life, Mabel Mir. Their love story continues to flourish and unravel. It is his ultimate pleasure to once again share the FIU stage with her.

Ivan R. Lopez – Ivan discovered his passion for acting and the theatre while taking an Intro to Acting class as a student at FIU.  Since then, he has acted in over 40 plays and short films in New York, Denver, and Miami.  Some favorite roles include Katurian in The Pillowman (White Rose Miami), Hal in Proof (White Rose Miami), Davey in second. (S12E – NY), Treves in The Elephant Man (Denver Center), Williamson in Glengarry Glen Ross (FIU) [he’ll be returning for the reunion with the 2002 cast, August 8, 9, 10].  He co-founded and is currently the co-Creative Director of White Rose Miami, a theatre, film, and creative education company.  Ivan is an adjunct faculty member at FIU Theatre and teaches Acting and Dramatic Literature. He has a Master of Fine Arts degree from the National Theatre Conservatory and a Bachelor of Fine Arts degree from Florida International University.

Dawn A.A. Plummer – Dawn (Karla Martel / Improv Ensemble / FIU Alumni Class of ’95) is actually having a huge déjà vu moment now that she is back trodding the boards of her ol’ Alma Mater.  Although technically not remembering DM-150 or VH-100 ever being as nice as the Wertheim space (These young folk have it far too easy! We had to perform in the SNOW.  Up a HILL, BOTH WAYS!!!…But we digress…Ahem) Dawn is very excited to be a part of this Alumni Showcase production.   While attending FIU she performed in such roles as Puck from A Midsummer Night’s Dream (going on to perform in that play three more times in the course of her life, seriously), Anfisa, the 80 year old servant from Chekhov’s The Three Sisters (one of her favorite roles), Duckling in Our Country’s Good, and she fondly remembers being part of the ensemble in FIU’s performance of Working! a musical about people who, well, work.
Dawn was last seen across the street as Rita in New Theatre’s (NEW) production of Educating Rita and was also in their 2011 production of A Street Car Named Desire.  Since moving back to Miami in 2005, some of Dawn’s other credits include performances in Taming of the Shrew, Miami Made Festival at the Adrianne Arsht Center, and the All Kids Included Festival at the South Miami-Dade Cultural Arts Center.  Due to the miracle of modern technology, she also made an appearance as a guest host on Chick Talk: an internet based talk show produced by Cinema 360 where she played her most challenging role to date – that of herself.  Dawn has a Bachelors of Fine Arts in Theatre from Florida International University and a Masters of Fine Arts in Acting from the University of Illinois at Urbana-Champagne.

Veronica Salgueiro – Veronica is a sophomore Theatre and Advertising major at the University of Florida, and a former student of Israel Garcia. Previous UF credits include: Measure for Measure and Dido and Aeneas. Veronica is thrilled to be a part of the FIU Theatre Alumni Festival and would like to thank Israel Garcia for the opportunity as well as her family, friends and boyfriend for their support!