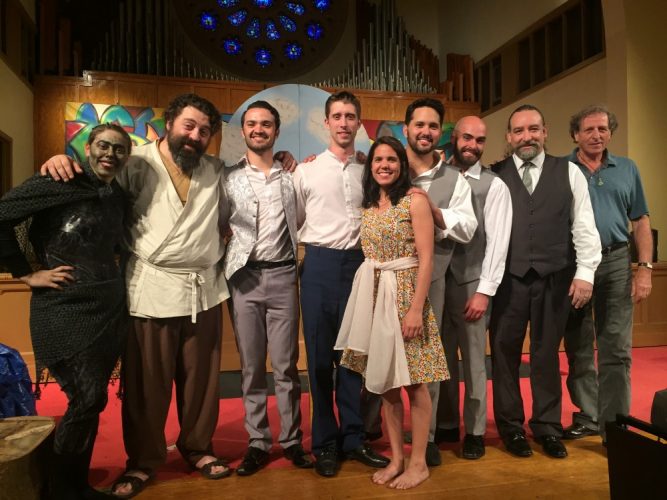 A group of FIU Theatre alumni and students wrapped up a high school touring production of William Shakespeare’s The Tempest. The tour visited 19 South Florida schools, performing a 50 minute version of the play 28 times over 25 days.

This is the third year the two companies have collaborated to bring a Shakespeare play to local high schools.

“There is great value to taking Shakespeare to the schools,” said Church. “It brings the play alive for the students.”

The touring company featured the work of theatre alumni Zack Myers, Amanda Ortega, Charles Sothers, and Paul Steinsland along with current students Robert Ayala, Nora Pantoja, and Alfredo J. Ruiz. Isidora Miranda, another current student, appeared in the play through filmed sequences projected on a screen. Rounding out the cast was Gabriel Bonilla, an FIU alumnus with a degree in Psychology.

“The tour gives our alumni an opportunity to continue working in the community. It also presents them with the challenge of getting up at 5am and being able to produce emotionally,” said Church.

The company would arrive at the schools as early as 6am so they could set up the scenery and props and get into costume and be ready to perform by 7:30am. After the performance, they would answer student questions and discuss the themes brought up in the play.

Steinsland, who played Gonzalo and also served as the company manager, found those talkbacks to be the most enjoyable part of the tour.

“It was really rewarding to connect with the students after the performance,” he said. “A lot of them had really wonderful questions and there was a lot of enthusiasm. Several students told us they didn’t like Shakespeare before, but once they saw it performed it was eye-opening.”