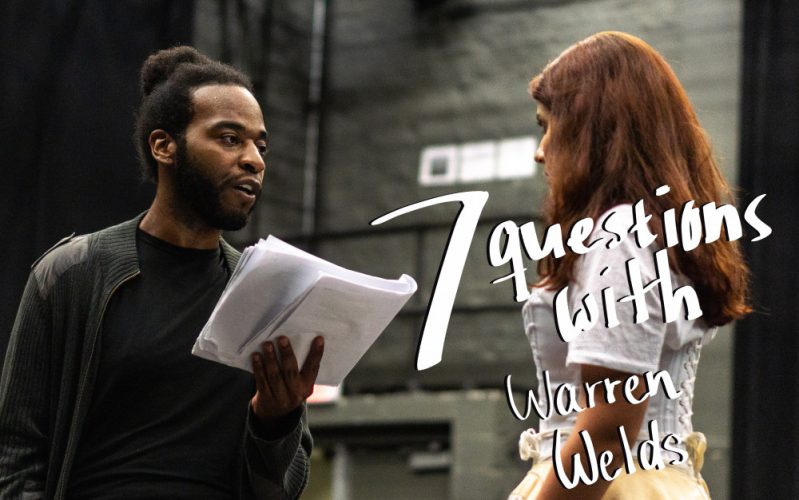 Warren Welds is ready to take on his first lead role at FIU Theatre as Ira Aldridge in Red Velvet, the true story about the first black man to play Othello. A junior pursuing his BFA in Performance, Warren is excited to step onto the stage and tell this important story. We sat down with him before a rehearsal to talk about the show, what it’s like as a theatre major, and what he geeks out about.

1. What do you geek out about?

2. What made you decide to major in theatre?

Basically, I was tired of being shy. I wanted to be a voice actor, because when I was a kid, I could do a lot of voice impressions. I didn’t know how to get into voice acting, so I decided to be an “actor actor”. I had started studying computer animation because my friend chose it as well and then I was thinking about whether or not I was doing the right thing. That’s when I switched.

3. What has been your favorite class you have taken so far?

Mesiner! That’s Acting III. Ever since I got here, I’d ask what Mesiner is, and people would gasp and say “Ooh, that’s the class where you cry.” The first week, we had to bring an item and talk about it- people were bawling day 1. I brought my first toy ever, a green truck. The professor can pick you apart without even trying, so when I was explaining my item, my professor said “so you don’t want to grow up?” And I just started bawling. The whole point of the class is to stay connected with your partner through any situation. I had my breakthrough in that class.

4. What is your dream project?

I would like to make my own film one day.

5. What has been your biggest challenge during this rehearsal process?

Pronouncing content (satisfied) vs. content (things, materials)! If they laugh, then I know if I said it wrong or not.

6. What can audience members expect from Red Velvet?

It tackles issues that people tend to avoid. There’s the racial issue, because Ira is the first black man to play as Othello, whereas it had been played by people in blackface. He was one of the first black men wanting to pave the way, saying “give us a shot, we have talent and passion.”

7. Why do you think it’s important to tell Ira’s story today?

It’s important because I learned that shortly after he died in England, he was quickly forgotten about. When he died, word came back to America and people were like, “Wait, we have to remember this guy”. Honestly, I didn’t even know about him until now. The reason we have to tell the story is because there’s an Ira everywhere. There’s somebody, even if they’re not black, who wants to pave the way and is doing so much.

One of my favorite quotes from Ira is, “I was really nervous. I mean, you give everything and you can’t tell if it worked. Did they feel it? Are they with you? And then you step out, exposed, and there’s nothing to do but look out at all those faces staring right back.”