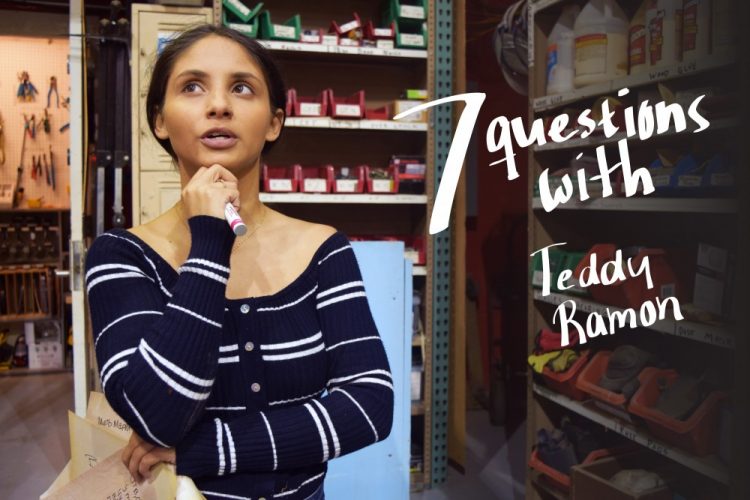 Born and raised in South Florida, Teddy Ramon is a girl “who speaks softly and carries a big stick.” Ramon, who loves architecture, history, and playwriting, is currently Prop Master for The Suicide. We were able to talk to her during crunch time to get to know her better and what she was most excited about for the upcoming show.

2. What’s your favorite prop from The Suicide?

The sausage. There was this one point where we had to grab condoms from the Student Health Center to make the sausage casing. The condom didn’t fit the sausage and we were all laughing in the shop. It’s funny because we have to try out different things. Because with props there’s not always a handbook. And that’s the best part about making props; it’s that you have to figure it out.

I would love to work in the Chicago Shakespeare Theatre and design Macbeth. I would also want it to be an all-female cast with a genderbend twist so the only male would be Lady Macbeth. And I would want to have my own distinguishable brand so when people look at my design they say, “Oh, that’s a Teddy Ramon design.”

4. How did it feel to see your play produced in New Plays last year?

That was amazing. I had never done something that made me think, “Wow, this is my work out there.” It was the first time my play was being seen. There’s this Anne Bogart quote, “If your work doesn’t sufficiently embarrass you, then very likely no one will be touched by it.” Man. I completely felt that. I was embarrassed to share my work, but everyone was laughing and enjoying it and that’s what I cared about the most.

5. If you could have dinner with any historical figure, who would it be?

I have to pick my namesake. Teddy Roosevelt. I’ve gotten so much confidence from him. To be as gentle, but firm as he was is something I strive to be. I have to eat steak with him so I’d take him to Texas de Brazil. Two Teddys and some meat. I think that’s all you need.

6. Who is your design soulmate?

Indy. Your design soulmate is basically your best friend and you design together. We’re working The Suicide together, but we have also done every single show together. She calms me down and she’s my empathetic side. I rile her up and motivate her. We’re push and pull, a Yin and Yang kind of thing. I have never worked so well with someone else.

7. Can you share a secret about a prop from The Suicide?

The tuba is not a tuba. It’s a sousaphone which I think is the funniest joke. We tried so hard to find a tuba and thankfully Professor Bernhardt from the School of Music lent us the sousaphone. There’s also a tuba manual prop and there’s a picture of a tuba on it, but there’s no actual tuba in the show.

Recognize some of Teddy’s designs in The Suicide which opens on April 12th. Tickets are now on sale. For more information and to reserve your tickets, visit go.fiu.edu/theatre. 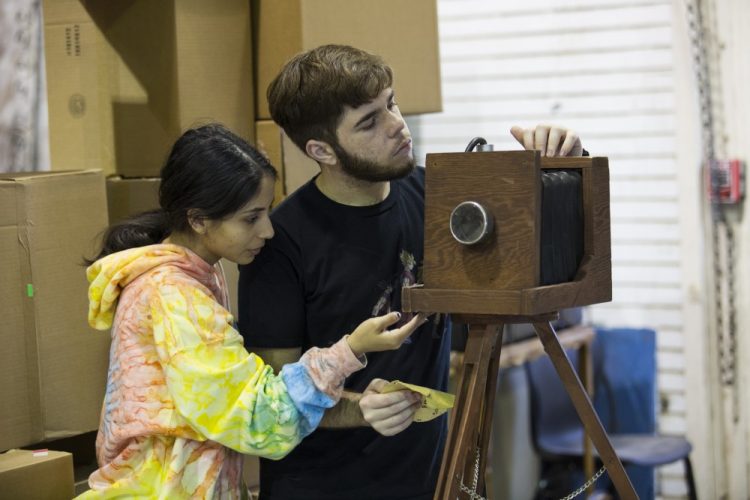 Teddy Ramon and Justin Rodriguez working on the antique camera prop for The Suicide.