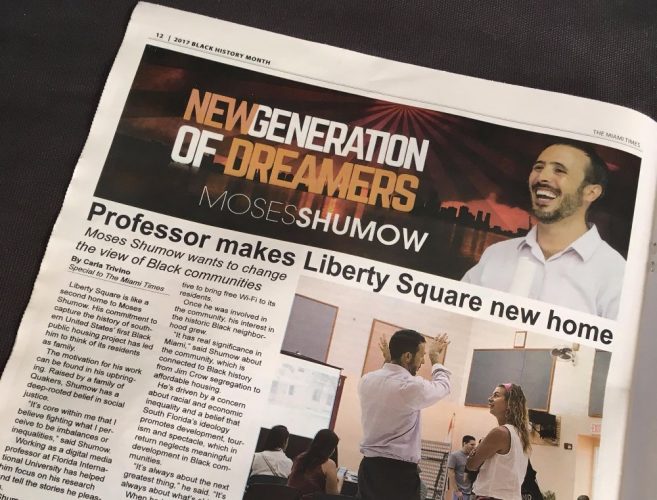 The Miami Times annually selects and highlights those in our community who display in their daily efforts qualities that emulate the works of the late Dr. Martin Luther King, Jr. and other Black History makers.

The New Generation of Dreamers of South Florida are people who use positions and platforms available to them to advance and improve the Black community. This year, The Miami Times recognized FIU School of Communication and Journalism Professor, author and activist Moses Shumow for his tireless commitment to Liberty Square and its residents.

“I see a real need for engagement in a community like Liberty Square on the part of myself as an academic and my students in terms of going into a community that many of us might never spend time in, but have probably heard about because of negative stereotypes and media portrayals, knowing that under the surface is a really beautiful and vibrant community filled with really amazing people,” said Shumow.

“I can tell stories, and I can try to build bridges between my students and the community. I’ve become a part of Liberty Square, and I think that’s a small step. Now I can send students out into the world having a deeper empathy and a great sensitivity about issues of race and a greater appreciation for what happens in communities beyond the headlines. The more I do it, the more committed I am to it and so to be recognized by The Miami Times just really meant a lot to me,” he said.

Shumow tells his students to never be afraid of moving outside their comfort zone and be involved by finding mentors and community leaders who can introduce them to important stories.

“The more you show your face, the more you’re willing to show up somewhere and commit to something – I think that’s important. Our young journalists should be willing to do that.”

Click here to view a feature story on Shumow by The Miami Times. Documentary screening of “Liberty Square: History, Power, and Race in Miami,” produced by Shumow will take place Tuesday, March 21 at the Shoma Hall University of Miami School of Communication at 6 p.m. For more information, click here.