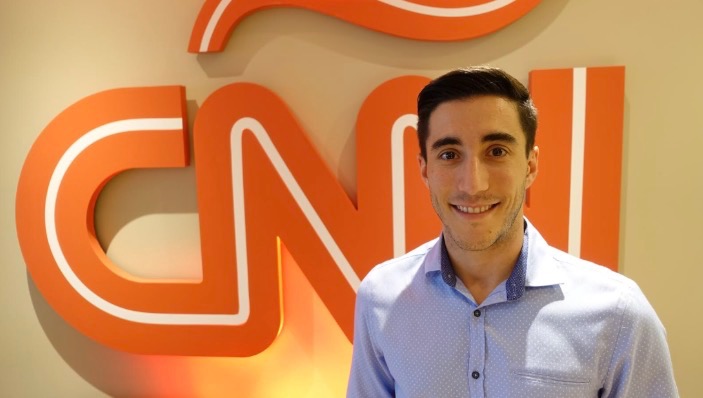 Sacristán-Rodríguez moved to Miami from Spain about two years ago where he had graduated with a bachelor’s in psychopedagogy from the University of Murcia. Newly arrived in Miami, he interned for the Spanish newswire Agencia EFE, which published his work in Spain, the U.S. and Latin America.

Before landing a position as Associate Producer for CNN en Español, he interned with the television network for five months assisting with the production of Realidades en Contexto and Fuentes Confiables. He also managed the programs’ social media accounts and wrote articles for CNN en Español’s website.

“Before coming to America, I was worried about how different the country’s journalism would be from Spanish journalism. However, as an intern at CNN en Español, everyone supported me and valued my knowledge. I felt like I was part of a team,” Sacristán-Rodríguez says.

To apply for the internship, he says he had to send a résumé through Turner.com, which eventually led to an interview. He says the Spanish Language Journalism Master’s program has highly qualified professors who have helped him transition to working in American journalism market. He heard about the program through Ramón Escobar, Vice President for Talent Recruitment and Development for CNN Worldwide and member of the FIU School of Communication and Journalism Dean’s Advisory Board.

“Sergio came into this program already with much experience working in both his country and the U.S., which was also a great advantage to help him succeed in CNN en Español,” says Juan Jesús Manrique, an adjunct professor for the Master’s program.

Manrique says he often reminds his students that the journalism culture in America is very different from its European counterpart. For example, in America, journalists often become the protagonist of the information they are responsible for covering, he says.

“Sergio is one of my most passionate students and he is always informed about current events. These particular qualities have helped him succeed immensely.”