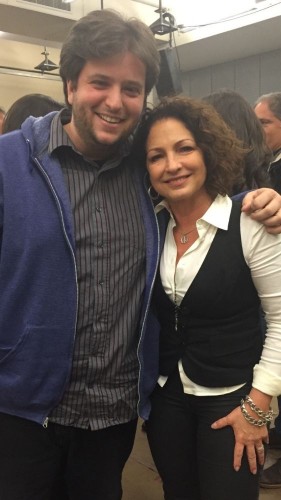 Manny Schvartzman, a 2009 FIU School of Music graduate, knows what it means to feel the rhythm of the music getting stronger; he has been working on the Gloria Estefan musical ON YOUR FEET for over a year. Hired in July of last year to come up with arrangements (musical and vocal arrangements) for a reading in New York during the initial development stages, Schvartzman adapted Estefan’s records for a 24-person Broadway cast. Now, the musical is in Chicago, performing to full houses and standing ovations at the Oriental Theater night after night.

Schvartzman is full of nothing but praise for the creative team of ON YOUR FEET. Not only did book-writer Alex Dilenaris recently win an Oscar for his work on Birdman, but original members from the Miami Sound Machine are in the and music department, and the Estefans themselves have been very involved. In Schvartzman’s words, “it has been very great to collaborate with them and build the show together.”

This isn’t Schvartzman’s first foray into musical theatre. Not only did he work on RENT when it came to FIU in 2010, alongside fellow CARTA grad and former Torch Award Nominee Andy Señor Jr (’13), but he joined Señor in bringing RENT to Havana, Cuba this past December, with Senor as director and Schvartzman as music director and supervisor. RENT was the first Broadway show on the island in over 50 years. “It was one of the most amazing and rewarding experiences I have ever had,” said Schvartzman. “The show consisted of seven of us in the creative team from Broadway, a full cast of Cuban actors/singers, and a full Cuban crew and creative team that we trained to our Broadway standards.”

Schvartzman isn’t one to rest on his laurels. He will soon leave Chicago for New York to work on “Real Men,” a show that will be performed for the New York Theatre Festival this summer off-Broadway. “Real Men” originated at the Miracle Theater ‘Actor’s Playhouse’ in Coral Gables in 2012, and Schvartzman will act as the musical director and vocal and musical arranger.

Schvartzman’s home base is Miami, and he works on productions year round for regional theaters in South Florida, cruise ships, and other local stages as a music director, arranger, and pianist, among other roles. He is also the director of music for La Salle High School in Coconut Grove. Schvartzman has received the Silver Palm Award and the Carbonell Award (the latter two years in a row) for music direction.