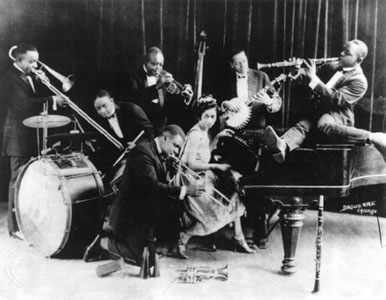 The WDNA (88.9FM) Jazz History 2013-2014 Lecture Series will feature two School of Music professors – Robert “Be Bob” Grabowski and Rodolf0 Zuñiga. According to the series curator and WDNA 88.9FM board member Jim Gasior, this eight part series is “part of a broader learning lecture series learning initiative for the purpose of educating the public about jazz.”

Bassist, composer, educator, and jazz radio personality Robert “Be Bob” Grabowski will present on The Roots of Swing: Coleman Hawkins & Lester Young on January 28, 2013. Grabowski has been an Adjunct Professor in Jazz Studies at FIU for over 20 years, and as an active bassist in the Miami jazz scene, he has produced major concerts and festivals for both academic and public venues. He currently serves as the Jazz Historian-in-Residence for the sixth season of the Larry Rosen Jazz Roots Concert Series at the Arsht Center.

Rodolfo Zuñiga is one of the most in-demand jazz drummers and educators in Florida. He will speak on the history of Bird, Diz, and Monk on February 25, 2014. Among his accomplishments, he recorded on the Grammy-nominated album Journey to the Heiros Gamos by the Darryl Tookes Band. In 2005, he was awarded a residency as the leader of the Rodolfo Zuniga Quintet at Carnegie Hall and has performed with artists such as Benny Golson, Dr. Billy Taylor, Robin Eubanks, John Fedchock, Shelly Berg, Jonathan Kreisberg, Fred Wesley, Slide Hampton, Othello Molineaux, Ira Sullivan, Sammy Figueroa, Melton Mustafah, Silvano Monasterios, Allan Harris, Felipe Lamoglia, Arturo Sandoval and Martin Bejerano. He has performed concerts and given master classes at the University of Florida, University of Costa Rica, University of Minnesota, Northwestern University, New World School of the Arts, The John F. Kennedy Center for the Performing Arts and University of Miami. At FIU’s School of Music, he lectures on jazz percussion and jazz history.