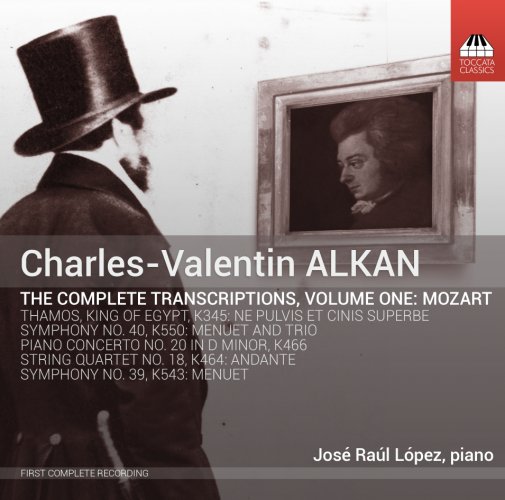 Charles-Valentin Alkan (1813–88) lived in Paris virtually his entire life. During the 1830s and 1840s he was considered one of the leading virtuoso pianists in the city, performing alongside his friends and colleagues Frédéric Chopin and Franz Liszt. His work is now becoming more familiar, but his transcriptions have not yet been recorded in their entirety. It seems appropriate that Lopez, considered an authority on the misunderstood genius of Alkan, should seek to redress this problem by recording Alkan’s complete transcriptions of Mozart – the first to attempt such a project.

A recent review by The Sunday Times (London) notes that:

“Alkan’s complete piano transcriptions of Mozart’s music – five items – make a sequence both diverting and profound. Lopez, who in the booklet explains Alkan’s treatment of the D minor Piano Concerto, K466, in extraordinary detail, plays captivatingly. One doesn’t miss the orchestra at all. Beside this is imaginatively set a D minor chorus, Ne pulvis et cinis superbe, from the music to Gebler’s drama Thamos, Koenig in Agypten, K345; followed by the andante movement from the String Quartet in A, K464. Vigrous minuets from Symphonies Nos. 39 and 40 are wonderfully listenable, too.” 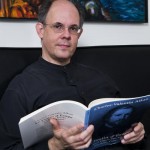 A versatile pianist and enthusiastic performer of chamber music, Dr. López is an associate professor and Coordinator of the Keyboard Studies Program at FIU and is the president of the South Florida Chapter of the American Liszt Society at FIU, inaugurated in 2010.

His interest in contemporary music features frequent world premieres and collaborations with composers along with his pursuit in resurrecting rarely heard works by Romantic and Classical composers. As the Artistic Director of FIU’s Keyboard Arts Series, he often seeks to educate South Florida audiences by infusing lesser-known works of Alkan, Liszt, and other contemporaries into programming, while utilizing talent from pianists such as Kemal Gekic, Misha Dacic, Mia Vassilev, among others.

He was a founding member of the Dalbergi Trio, has collaborated as a member of FIU’s resident New Music Ensemble, the Nodus Ensemble, and was the orchestral pianist with the Florida Philharmonic for 13 years. Active throughout South Florida, he has been a featured performer in the Florida International University’s Music Festival; ISCM New Music Miami Festival, the Palm Beach Chamber Music Festival, Coral Gables’ Mainly Mozart Series, University of Miami’s Miami Festival, and is founder and co-director of the Deering Estate at Cutler’s “Living Artist Concert Series.” He has recorded for SNE, Albany, Innova, and Toccata Classics record labels.