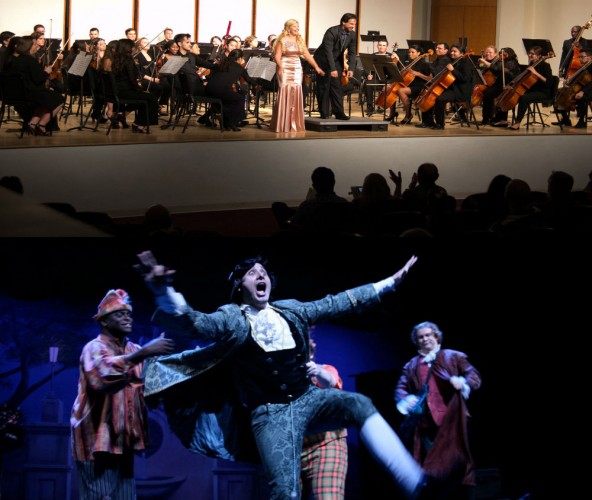 The Florida International University School of Music begins its 2015-16 season under the leadership of Interim Director Robert B. Dundas, director of the FIU Opera Theater program. This season’s 180 performances and events will be enhanced through local partnerships and interdisciplinary collaborations, the creation of new series, and new sound and lighting enhancements made to the Herbert and Nicole Wertheim Performing Arts Center at FIU.

The bustling season begins with a program of “Symphonic Dances’ at the Herbert and Nicole Wertheim Concert Hall on September 26 with returning South Florida conductor Andrew Bisantz, as he leads the FIU Symphony Orchestra in a new series, Distinguished Conductor Series. According to Bisantz, “I’m thrilled to be back at FIU as the guest conductor for this year’s spectacular opening concert of the FIU Symphony. I’m particularly excited to be exploring Beethoven’s mighty Eroica Symphony with the students – it’s a true joy to be with them as they discover the myriad of layers in this work that come together to make it the towering masterwork that it is.” This orchestral series will feature conductors and artists from all over the globe, including Miami Music Project’s Artistic Director James Judd in performance with famed pianist Steven Hough on January 15, and Latin-American conductors Carlos Riazuelo and Maximiano Valdes, with guests invited to ‘Meet the Maestro’ and orchestral members following each performance.

On October 5, the Jazz at the Wertheim Series, directed by Gary Campbell, will open with South Florida vocalist Lisanne Lyons in an evening of 1940’s jazz music performing classics like “Lover Man”from 1942, which was introduced by the great Billie Holiday. Audiences will also have a sneak preview of some of the images from Walls of Color: The Murals of Hans Hofmann Exhibit that will open the following week at the Patricia & Philip Frost Art Museum.  On October 27, audiences are expected to pack the Wertheim Concert Hall with Jazz lovers from The Keys to Palm Beach in expectation of famed NYC-based jazz violinist Sara Caswell. Recognized as a “Rising Star” in both the 2013 and 2014 DownBeat Magazine Critics Poll and as one of the top jazz violinists in both the 2011 and 2012 JazzTimes Readers’ Poll, Sara’s two groups (the Sara Caswell Quartet and the Caswell Sisters Quintet) have been heard in venues such as Jazz at Lincoln Center’s Dizzy’s Club and will perform alongside the FIU Faculty Jazz Ensemble. On November 19, vocalist Lisanne Lyons will take to the stage, followed by Latin Jazz, Big Band, and of course, the highly popular Festival of Jazz Bands occurring next February.

Chamber music lovers will rejoice in the return of the FIU Faculty Artist Series featuring the best of the University’s artists-in-residence and leading faculty on the stage of FIU’s concert hall. This season, we welcome double bassist Luis Gomez-Imbert, the Amernet String Quartet, powerhouse pianist Kemal Gekic, violinist Robert Davidovici, pianist Jose Lopez, and faculty from the Wind Studies department with the beloved music of Amadeus Wolfgang Mozart beginning Oct. 6.

This season, the Amernet String Quartet is delighted to introduce acclaimed violinist Tomas Cotik as its new second violinist with their first ensemble performance together taking place on WLRN’s South Florida Arts Beat on August 28. Among the highlights of this season are the Amernet’s return to the John F. Kennedy Center for The Performing Arts as a guest on Pro Musica Hebraica, tours of Taiwan and Israel, and appearances throughout the country. Locally, the Amernet is proud to lead the inaugural year of FIU’s Jewish music series, “Journey Through Sound: Exploring Jewish Life Through Music,” a sequence of five concerts at the Jewish Museum of Florida, in collaboration with distinguished guests and artists from Florida Grand Opera beginning November 12. Given their Jewish background, the Amernet has pursued a long and important commitment to disseminating the voices of these silenced or repressed musicians. Later in their season they will be joined by pianist Dror Biran, Milwaukee Symphony’s concertmaster Frank Almond, and more.

Choral Director Dr. Kathryn K. Longo, now in her second year at FIU, has an exciting season Voices Around the Globe incorporating the sounds of Latin American rhythms throughout the year, beginning with Martin Palmeri’s captivating tango mass, Misa a Buenos Aires, on Oct. 8. Featuring a unique blend of the traditional music of Argentina, the beloved bandoneon, and the colors and textures of the modern symphonic orchestra and choir, this mass has impressed audiences all over the world. Audiences will be further charmed by holiday programming that includes a sing along with the FIU Choirs on December 4, a special performance with the Amazonia Vocal Ensemble on March 3, and an evening of music featuring the iconic texts of Shakespeare on April 11, as part of the 400th anniversary celebration of the bard’s death.

The South Florida Piano Masterworks Series, in partnership with Steinway Piano Gallery in Coral Gables, welcomes “South Florida’s cultural maven” and musicologist Frank Cooper who will provide special commentary throughout this season, beginning with the annual Liszt Festival. The first of its kind in South Florida, it is sponsored by the South Florida chapter of the American Liszt Society at FIU, and will feature Miami International Piano Festival favorite Kemal Gekić, pianist Jose Lopez, guest concert pianist William Wellborn, soprano Hein Jung from the University of Tampa, and the FIU String Orchestra who will take to the stage to educate audiences about the great Romantic Hungarian Franz Liszt on Oct. 17-18. Later, a number of guest pianists will perform both at the Steinway Piano Gallery in Coral Gables and the FIU concert hall including Northwestern’s Dr. James Giles, Chilean artist Paulina Zamora, Ecuadorian-American artist Washington Garcia, and Israeli Gila Goldstein, who has “a technique as fierce and fiery as the color of her hair.”

Dedicated to the study of early music, the School will host the Society for Seventeenth-Century Music and will partner with other local arts organizations such as the Miami Bach Society to present a number of seminars and performances to run in conjunction with Shakespeare’s Folio at FIU this coming spring. Included is the much anticipated annual production of FIU Opera Theater. This year, FIU Department of Theatre’s Philip Church will direct Shakespeare’s Venus and Adonis on February 21 and 22. Visitors will also be able to see a number of early guitars on display at the Frost Art Museum through the newly-established Miami International GuitART Festival’s (MIGF) Luthier Expo from February 24-28. The festival will also feature eleven concerts, five masterclasses, three lectures, and a composers panel, as well as a composition competition.

The Wind and Percussion Arts Series featuring the FIU Symphonic Band, Chamber Winds, and the award-winning FIU Indoors have a number of performances planned, including the annual holiday concert showcasing the highlights of the 2015 FIU Marching Band season on Dec. 2. Beginning on October 7, audiences can expect to be humbled by projected imagery and dedications to honor the plight of diverse peoples from adversity in a series of four concerts inspired by the music and lyrics of Bob Dylan’s iconic song “Chimes of Freedom.” In this series, the renewed human spirit of those who lived through Hurricane Katrina, WWII, Vietnam, and the Holocaust will be honored with Aaron Copland’s pinnacle “Lincoln Portrait” and David GIllingham’s heartfelt “Heroes Lost and Fallen.”

This spring, the New Music Miami ISCM Festival welcomes an array of innovative and well-known composers and performers from all over the globe in celebration of its 20th successful season. This contemporary music festival, founded by the former Director of the School of Music Dr. Orlando Garcia, provides exciting performances along with master classes and panel discussions with the invited guest artists at the College of Architecture + The Arts | Miami Beach Urban Studios and the Spanish Cultural Center. Festival highlights include the performance of celebrated guest composer Steve Stucky, soprano Tony Arnold, Calloway-Sudol Duo, pianist Kathleen Supove who will perform a world premiere by composer Garcia, Augusta Read Thomas, Pianist Cristina Valdes, virtuoso clarinetist Michael Norsworthy, returning alumni composers, and performances by the FIU NODUS Ensemble and Amernet String Quartet.

Support your fellow Panthers by Immersing yourself in performances featuring our very own alumni, beginning with pianist Adrian Quesada on Sept. 12 , Marta Brankovich on Sept. pianist Silvije Vidovic on Oct 17 and 18 as part of the Liszt Festival, guitarist Celso Cano on Feb. 24, and alumni composers concerts and alumni piano recitals each season. Or show support for our vast array of star student ensembles as part of the FIU Student Music Showcases throughout the year, presenting our very best at no charge.

In addition to a very active performance calendar, over 60 master classes by esteemed musicians and scholars expect to find their way to the Herbert and Nicole Wertheim Performing Arts Center, all of which are free and open to the public. Now in its second year, an exciting partnership with the Friends of Chamber Music of Miami resulted in the creation of Distinguished Artist Master Class Series, which will include highly sought after performers such as violinist James Ehnes, cellist Robert DeMaine, pianists Joseph Kalichstein, Steven Hough and Nicholai Lugansky.

FIU Faculty/Staff/Alumni receive discounts to performances. In effort to support local arts initiatives, students 18 and under are now able to purchase tickets for only $5. Student discount rates are also available to individuals attending a college or university who are under the age of 26 with a valid I.D. By ordering online, patrons can save $2 off general admission. More information about our concert season can be found at music.fiu.edu/events. For group rate, contact the box office at wpac@fiu.edu or by calling 305-348-0496.

See More Of Our Performances at MUSIC.FIU.EDU/EVENTS!