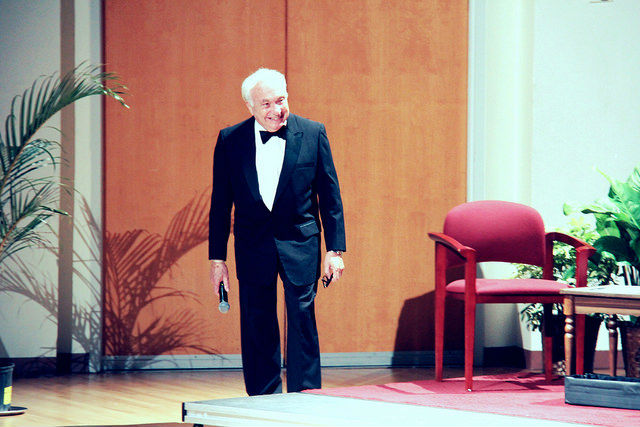 Composer, educator, trumpet player and conductor, Kaufman’s musical life has ranged from membership in the legendary Woody Herman Band to composition studies at Juilliard with Vincent Persichetti and writing over 150 works that have been performed by major American and international orchestras and renowned chamber ensembles. During his decade as director of the FIU School of Music, Kaufman brought prominent musicians to the southwest Miami campus as faculty members and guest master class instructors. He also directed an annual music festival at the school that featured well-known guest artists and challenging repertoire. 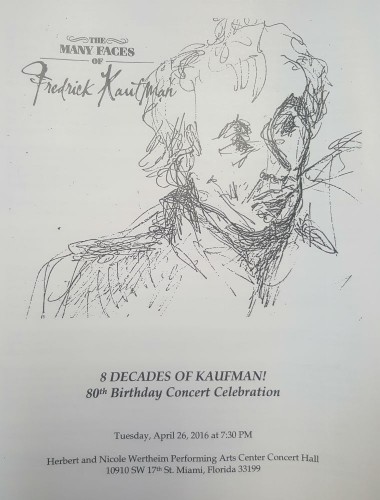 The astutely chosen program was a fine sampling of some of Kaufman’s best compositions. Opening the evening, oboist Marco Navarette appeared on the stage of the university’s Wertheim Auditorium playing a jaunty tune before exiting. That melodic pattern forms the opening of Kaufman’s Echoes, which was presented later in the program.

Throughout the concert Kaufman commented on his works and the circumstances of their composition. He noted that Meditation for a Lonely Flute had its genesis when he found himself sitting in the Sinai Desert at the conclusion of Israel’s 1973 Yom Kippur War amid the sand dunes and wind. The music’s uniquely ruminative sense of stillness beautifully reflects this scene. It was presented with a video by filmmaker Donna Cameron, with Adeline Tomasone exquisite flute playing on the soundtrack.

Kaufman’s Cello Sonata dates from 1956 when he was 19 years old and studying with Persichetti who assigned him to write a sonata in the musical style and language of Bartok. The initial Allegro opens with a theme of great nostalgia and yearning. Unmistakable glints of Bartok’s Hungarian paprika churn through the movement. An eerie and misty Andante is replete with tinges of darkness while the folksy, jagged rhythms of the finale lead to a robust conclusion. Despite its early lineage, the score is highly appealing and brilliantly conceived. Cellist Iris van Eck played with plenty of fervor and tonal power. Pianist Kemal Gekic, one of Kaufman’s numerous important faculty hires, was alternately elegant and fiery but always strongly supportive of the cello’s dominant role. 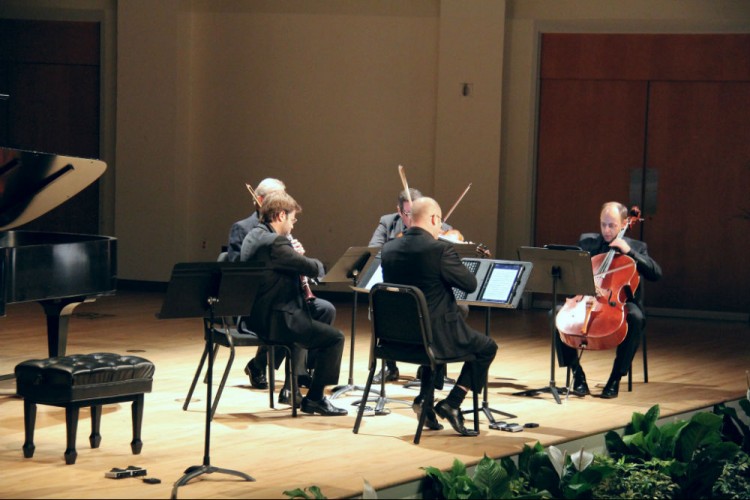 Kaufman’s Clarinet Quintet was conceived as a concerto for clarinet and string orchestra after the composer received a call from a conductor who needed a new work in a matter of weeks for a soloist who had rejected another score. (The distinguished clarinetist Richard Stoltzman played the concerto at one of Kaufman’s FIU festivals  and recorded the work in that version.) Kaufman noted that, when writing the work,  he always thought of the score as a chamber quintet. Hence he simply dropped the double bass part for more intimate performances.

The Clarinet Quintet is one of his finest works. Jittery string figures introduce the jazzy Copland-tinged clarinet line. After the first movement’s intense climax, the Andante mesto is a solemn night music. The rapid finale gives the soloist a virtuosic turn. Richard Hancock articulated the fast, angular melodic threads with lean and velvety sonority. The Amernet String Quartet excelled in the important string writing, producing corporate power and tonal gleam.

Echoes, a 1992 song cycle, is scored for tenor soloist, oboe and viola. Ranging from a wildly leaping and hilarious setting of  “Don’t Let That Horse” by Beat poet Lawrence Ferlinghetti to a lyrically expressive “Invictus” (by W. E. Henley), the four songs are highly varied and inventive. The cycle is vocally challenging for the tenor soloist and Robert B. Dundas, currently director of the FIU music school, excelled in the vocal writing’s extended range but also offered beautifully molded phrasing and tonal beauty in the more reflective pieces. The gorgeous sound of Navarette’s oboe and Michael Klotz’s sonorous viola were highly potent in the instrumental interlude.

Yin and Yang: A Dialogue for Two Pianos was commissioned for the 2003 Dranoff Two Piano Competition and fulfills the requirements of a competition piece by testing the limits of the competitors’ technique and dexterity. A series of vignettes finds the two pianists moving from  repeated chords to knuckle busting octaves and tone clusters (with the elbows down across the keyboard, leaving the sound die away). Marta Brankovich and Gekic were dazzling in this tour de force which must have terrified some of the Dranoff competitors.

The String Quartet No. 6 (“The Urban”) was commissioned by the Amernet foursome in 2006. This 16-minute work is top drawer Kaufman. Based on the sounds of Kaufman’s native New York, the work effectively portrays the bustle of city traffic and crowded streets but also the moody nocturnal hues of moonlit evenings. Lush melodies and a jazz-based pulse dominate this subtly crafted chamber work.  First violin Misha Vitenson’s high wire solos effectively conveyed frantic urban gridlock and quiet, long spun moody thematic contrasts. The Amernet had a field day with this riveting musical portrait. They were unafraid to play the more animated episodes with gutsy, idiomatic down and dirty jazz strokes.

Kudos to producer Karen Fuller for the professionalism and smooth coordination of the program and the exceptionally fine program booklet which included comments by Kaufman on all the works performed and bios of the individual artists (as well as a sketch of the composer by his wife Florence). The entire evening was a well-deserved tribute to Kaufman for his distinguished compositional output and important contribution to both FIU and South Florida’s cultural life.