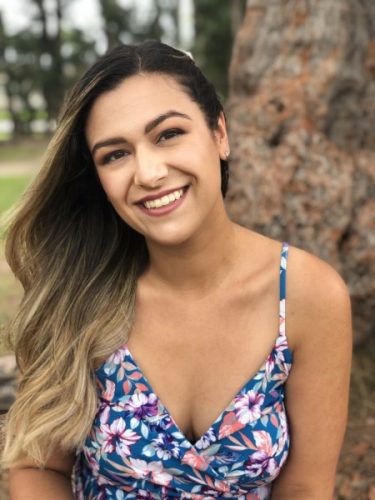 Orianna Gutierrez always had a passion for singing and performing and this past summer, she was able to travel across Europe performing on grand stages and living out her dream. From music festivals to theatre shows, Orianna was truly making her mark as she sang in Vienna, London, and even debuted in the musical, Mad Hatter! She is a first-generation college student and one of the first members of the 4+1 master’s program offered by the FIU School of Music and is a recipient of CARTA and School of Music scholarships.

When did you start singing? Why?
I’ve been singing ever since I could remember! My parents LOVE to share stories of me dressing up as Ariel from The Little Mermaid (or any other Disney princess) and singing at the top of my lungs all around the house. Something about pretending I’m someone else and putting on a show for others to bring them joy has always appealed to me.

Did you always want to pursue singing as a career?
Yes, but it definitely took some acceptance and commitment on my part. Although I attended singing/dancing conservatories on and off throughout elementary and middle school, I didn’t always embrace my artistic side. I was a studious kid and thought I would go on to pursue a degree in law or in medicine. Then, I discovered my first Broadway musical: Wicked. I completely fell head-over-heels in love with it and that exposed me to the world of Musical Theatre.

My friend noticed my passion and encouraged me to audition for the choir in high school. I then got into the advanced choir and even auditioned for the school musical! My choir director, Alicia Romero-Sardiñas, saw something in me and gave me the push I needed to feel confident in my singing. She encouraged me to pursue this path, and now I’m living it. I will forever be grateful to her.

Describe your experience of being able to perform across Europe?
Absolutely amazing. If you had told me a year ago that I would be singing in Europe for almost two months, I would have never believed it. It was my first time in Europe as well, so getting to learn about a different culture, outside of the “norm” I was used to was an eye-opening experience. I developed patience (that I didn’t know I lacked), as well as a deeper love and understanding of my craft. I probably would not have had that experience if it wasn’t for my supportive family/loved ones and my wonderful professors: David Dolata, Federico Bonacossa, and my voice teacher, Scott Tripp. They pushed me into really going out of my comfort zone and jumping on to this opportunity of a lifetime.

Describe your experience performing at the Vienna Summer Music Festival and London Summer Musical Theatre Academy.
I was initially very anxious. I also had to learn/memorize four operas in the three weeks I had before flying out to Vienna. To say I was stressed was an understatement, but it definitely showed me what I’m capable of.  The program provided me with lessons, coaching, and masterclasses with world-renowned musicians, as well as plenty of performance experience. I premiered lead roles in two micro operas; Rebecca in Scott Joiner’s The Shower, and Veronica in Alexander Timofeev’s The School of Marital Happiness. I also understudied Rosalinde in Johanne Strauss’ Die Fledermaus, and was a Lay Sister in Puccini’s Suor Angelica. I’m grateful for the stage experience, the networking, and the lessons learned during my time in Vienna. I want to give a big thank you to everyone who helped me get there!

London was different but equally as exciting. We had daily two-hour dance classes with West-End choreographers that kicked us into shape! I brushed up on my dancing skills, and I got to work with Broadway and West-End actors whose resumes ranged from Shakespeare, all the way to modern-day musicals. Alice Fearn, who was playing Elphaba in West-End’s Wicked at the time, was one of my favorite masterclass instructors. As I previously mentioned, Wicked was what introduced me to this world, so you can imagine how I felt learning from Broadway’s favorite green girl, herself!! My time in London ended with the premiere of Mad Hatter: The Musical, in West-End’s Leicester Square Theatre. The show, written by Vincent Connor and Michael Polo, centered on the dark origins of the Mad Hatter from Alice in Wonderland. I played the role of The Hat, a demonic being that drives the Hatter insane. Getting to premiere a show in London’s West End was a dream come true (I actually still get choked up about it)!

I was fortunate enough to watch six West End shows in the time I was there. I learned so much from just watching these professionals bring characters to life. I can’t wait to apply my extended knowledge to my Graduate studies here at FIU.

Do you have any specific plans for the future after FIU?
I have a few! I will be collaborating with Miami Symphony Orchestra as the Soprano soloist for their performance of Beethoven’s Incidental Work, Egmont, in the Spring of 2020, as I finish up my master’s degree in Vocal Performance. I have some new music recordings coming up as well and auditions for other programs. I’m definitely keeping busy. My goal is to perform on the Broadway stage.

What advice do you have for those pursuing a career in Vocal Performance and Music?
Be kind. This is a tough business and kindness goes a long way, especially when you will meet people who are not. It’s so important to internalize that someone else’s success does not equal your own failure. We all have our own individual journey and developing thick skin is absolutely necessary. Leave the jealousy behind, it will only do you more harm than good. Rejection is hard, especially when it seems like that’s all you get, but here’s how I see it; If I didn’t get a role or a gig that I really wanted, it’s because there’s something bigger waiting for me in the future. This has definitely been the case for me over the last few years. In fact, that’s how I got to do what I love most in Europe for 8 weeks. When things get tough, I always remind myself that I’m doing this because there’s nothing I love more than making art. Keep that fire for your passion alive and use it to push your career and artistry further.