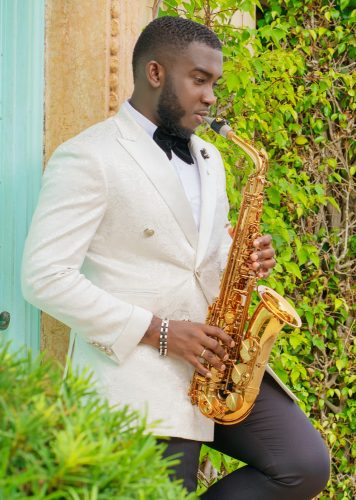 FIU School of Music Junior and Music Education major, Ketler Macome, has been passionately playing the saxophone for about 9+ years and is about to debut his first album “I Do”. Ketler is a first-generation college student, arriving from the Caribbean country of Haiti and dreams of being a pillar of inspiration and a role model to not only the youth in Haiti, but the entire world.

When did you start playing the saxophone? Why?
I started playing the saxophone in 2010. My dad owns a music school in Haiti called “Aux Cayes” and that’s where I took my first music lesson. My dad created this school because he thought it would help reduce juvenile poverty and crimes within our community in Haiti. He always said, “Give a kid an instrument, so they won’t think about having a gun in hand.” I got inspired by my dad and music, for me, he’s the concrete example I want to follow. Eventually, I want to go back to Haiti to not only help, but to make sure that the upcoming generations have a role model to look up to in Music.

Did you always want to pursue music/performance as a career?
Since I started playing, I always wanted to share this passion. I am so passionate about music; it’s stronger than me. That’s why I always believe that such strong passions can open doors not only for me and my community but also to the world. So, that is why I have decided to pursue a career in music.

What path did you take to get to where you are at FIU today?
After my studies in Haiti, I traveled to the United States and I began studying at Miami Dade College. I then transferred to Florida International University (FIU) to pursue a career in Music Education.

What steps did you take in preparation for releasing your album?
In order to prepare this album, I worked hard in the studio with my friends and musicians, got advice from teachers, and I practiced a lot! I did all these things because I wanted to give the best of me in this project.

What can we expect from the album and where can we find you?
I believe this album will have a worldwide impact. It’s going to be a mixture of Caribbean, African, and modern music. I have given my absolute best effort in this project; some of the songs have lyrics, others are just instrumental. You can find me on the following social media sites:
Instagram: @KetlerSax
YouTube: Ketler Macome OFFICIAL
Facebook: @KetlerSaxX

What advice do you have for those pursuing a career in Music Education?
My advice for those who are pursuing a career in Music Education is to keep pushing and never give up on your dreams. I know what it means to be a musician, so don’t ever lose hope. Also, always keep in mind that being a musician is a gift. Continue being an inspiration everywhere you go because you are destined to bring joy to the world.

How has FIU been helping you get to where you are today in your career?
Being at FIU is like a dream coming to reality. I always wanted to be in such a great environment. FIU helps me to know more about myself and develop my talent. I want to personally thank the FIU School of Music faculty/staff, who have always believed in me since the day I applied to the School of Music. They made me feel like I was at home and they have shown me that they care, which gives me a lot of strength.

Describe working with Aldo Salvent and the FIU Saxophone Studio.
Working with Aldo Salvent has been such a great opportunity. Not only is he one of the greatest saxophone players in South Florida, but he is also a great teacher. He is someone who cares for his students. He has pushed me a lot and I can still remember my first audition. Aldo was always there to motivate me, help me find the best in me, and push me to be a performer.