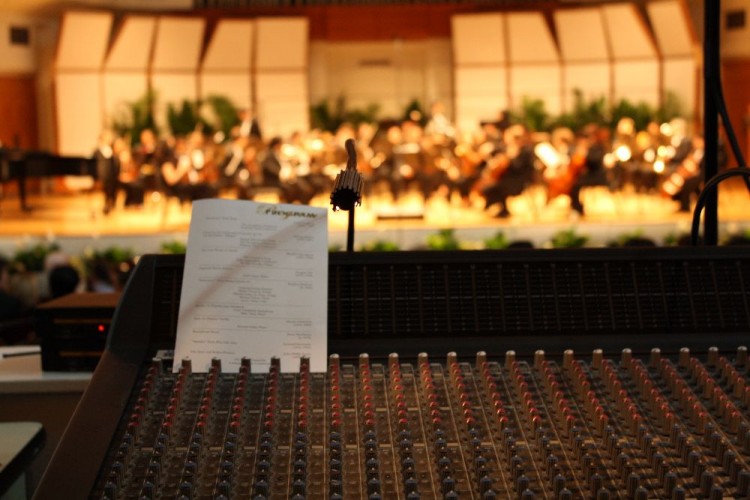 Student Composers Use Voice to Explore Elements of Life

The first performance was given by Juan Mansilla. Mansilla performed his piece himself, providing a brief insight into his work before actually starting. Not only did he explain the origin of his instrument, a Columbian Tiple, but he also stated how the song was in honor of his late grandfather. After his three part performance, Alberto Monnar stood to explain his, “Explorations for Saxophone No.1.”

‘Explorations For Saxophone No. 1’ is showcasing a new voice that I have developed as a composer, which is my fixed media voice,” Monnar explained in an interview.

“I want the audience, to take home the fact that the saxophone can do many things that normally is overlooked,” Monnar continued, “There are many attributes to a saxophone’s physicality that can contribute to sound and music. The saxophone is a world in itself, and must be explored.”

Monnar’s performance was played over surround sound, and immersed every individual in the room to a different world, a world filled with noises we tend to be deaf to. The unconventional sounds of a saxophone and other muses definitely provided the audience an unique view to a musical instrument that resulted in a spectacular, talented compositional piece.

“I would like to take my skills of music composition to orchestras, to chamber groups, to singers, and to choirs of the future generation. I would like to write for other people, be it vocal or instrumental,” said Monnar, when asked where he was aiming to take his compositional skills throughout life.

Following him was Marcus Norris. Norris’s performance was split between a guitar and cello. The result in this shared custody of the music was a tremendously emotional piece. This is clearly evident through the actual performance’s name, “Peace in Pain.” Similar to Mansilla and Monnar, Norris provided a brief summary before his piece. He explained that the composition represented how one may become used to the pain that one deals with in life, resulting in peace.

Although Norris provided this summary, he made sure to allow the audience to take their own meaning from the music.

“My aim is for it to be a meditative experience, in which people can assign their own meaning,” he states.

When asked about the direction he’d like to take his compositional voice in, Norris provided a specific answer.

“I just hope to travel more for music, in general. I think we have a great mentor in Dr. Garcia, head of the music composition program for the School of Music at FIU. He’s constantly traveling to have his music performed. Since I started studying with him he’s been to Mexico, Spain, Sweden, Italy, and many more places.”

Maureen Reyes, the only female composer of the night, followed suit.

“I am very pleased and excited with this presentation, because despite that this is not my first concert as a composer, it is my first presentation and semester as part of FIU Graduate Students,” said Reyes.

Her piece was played over surround sound as well, resulting once more in an emotional and mental journey for the audience. Reyes’ piece, “Pulse of Life,” featured the combination of heartbeats, monitors, and human beings breathing. The ridiculously emotional and dream-like composition was dedicated to her father.

“It is a very special piece to me because it was dedicated to my father and presents a recount about some elements that allow life, as well as the important role of time within life itself, through this wonderful universe that is electro-acoustic music,” said Reyes, in reference to her work.

Similar to her cohort Monnar, Reyes had kind words directed towards her mentor.

“It is an honor for me to participate in this concert as part of the Graduate students in composition, and also to be a student of Dr. Orlando Garcia, who is guiding me to the correct way to success in this wide world that is the music.”

Last but not least, Gilbert Kong stood up to provide a backdrop to his work. His entirely piano piece was dedicated to Clair Patterson, an American geochemist. This drew some extra interest from the audience, most likely due to the uncommon mixture of science and art. However, the compositional piece was a success. Performed by Daniel Manoiu, each note rung out through the studio, striking with impactful sentiments. Through the music, Kong managed to portray the struggles that Patterson had ventured through his studies and campaign against lead poisoning.

All in all, FIU’s School of Music: Student Composers Concert was a talented success, resulting in a tasteful, enjoyable evening. If one wants to catch more of the School of Music’s events, a calendar can be found online at wpac.fiu.edu, and tickets may be obtained by phone through the Wertheim Performing Arts Center Box Office, in person, or online.