FIU Artist-in-Residence and acclaimed pianist Kemal Gekić and FIU Professor Emeritus of Composition Fredrick Kaufman, just returned from a 10-day U.S. State Department-sponsored concert tour to Serbia initiated by The Academy of Arts in Novi Sad where they were received by dignitaries from the United States, China, and Japan at their performance of the famed “Guernica” Piano Concerto this April.

The three-movement concerto takes it name and mood from the 1937 Pablo Picasso anti-war painting, “Guernica,” which serves as a testament to the horrors of war. The concerto was a commission for Gekić and the Czech National Symphony Orchestra, completed by Kaufman in 2011 before it began to premiere in 2013.

A Look Into “Guernica”

The debut release of “Guernica” on Navona Records features three of Kaufman’s orchestral works: the “Guernica” Piano Concerto – an anti-war piece that both depicts the horrors of war and cries out for peace with haunting melodies and intoxicating rhythms; Concerto for Cello and String Orchestra, “Kaddish” – a work written in memory of the composer’s parents, representing their devotion, intelligence, and complexities; and “Seascape” – an orchestral work representative of the natural order of existence as illustrated by the dual calmness and turbulence of the sea.

In 2013, “Guernica” premiered and recorded at the famed Smetana Concert Hall in Prague with the Czech National Symphony Orchestra where the collaboration between the two colleagues paid off by receiving glowing reviews by Prague-based newspaper, The Music Review, stating that “Kaufman’s concerto is a convincing, emotional, and vivid piece of music. It is “the pièce de résistance.”

The newspaper, equally impressed by Kemal Gekić, claimed that “His piano touch, musicality, and personal persuasiveness rank him among the most important living piano players.”

It wasn’t long before the two headed off to Puerto Rico in 2015 for “Guernica’s” North American debut with the Puerto Rico Symphony at the Casals Festival, and then again at FIU’s very own Wertheim Performing Arts Center for a South Florida debut in November 2018 as part of the FIU Music Festival. After a very well-received performance by a Serbian public this April, a tour to Spain is currently being discussed. 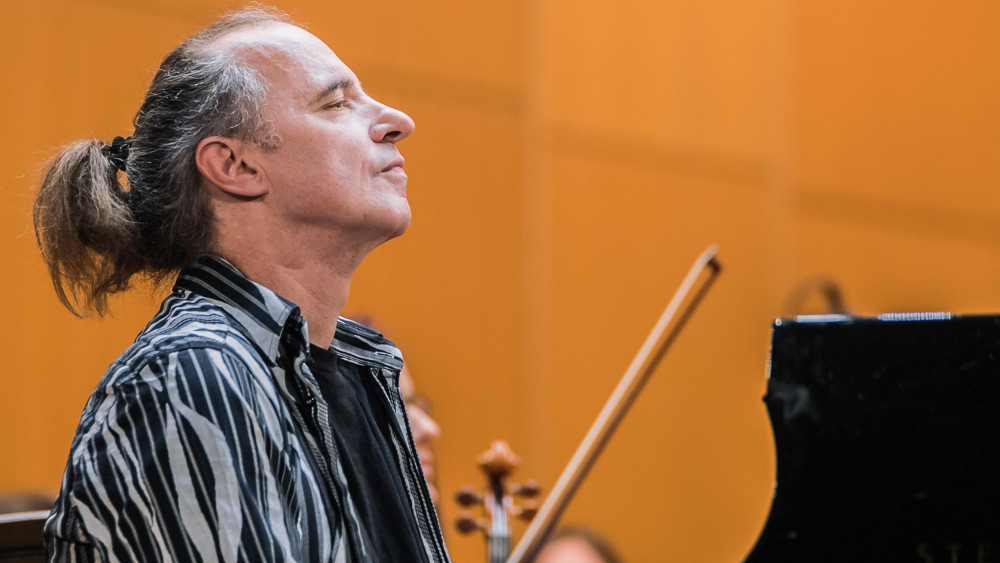 Croatian-born pianist and former child prodigy, Kemal Gekić, is not only a very well-known concert pianist in Serbia, but he also has an international reputation for excellence worldwide. After graduating with honors from the Academy of Arts in Novi Sad, Serbia, in 1982, he was given a faculty appointment by the piano department for 20 years. Finally, fate brought him to Miami for a debut performance at the Miami International Piano Festival where he caught the attention of FIU School of Music administration and was offered a position as Artist-in-Residence in 1999.

As part of the tour this spring, he gave a series of masterclasses and solo recitals in both Serbia and Bosnia as a guest of The Academy. Possible collaborations and exchanges between The Academy and FIU are currently being explored. 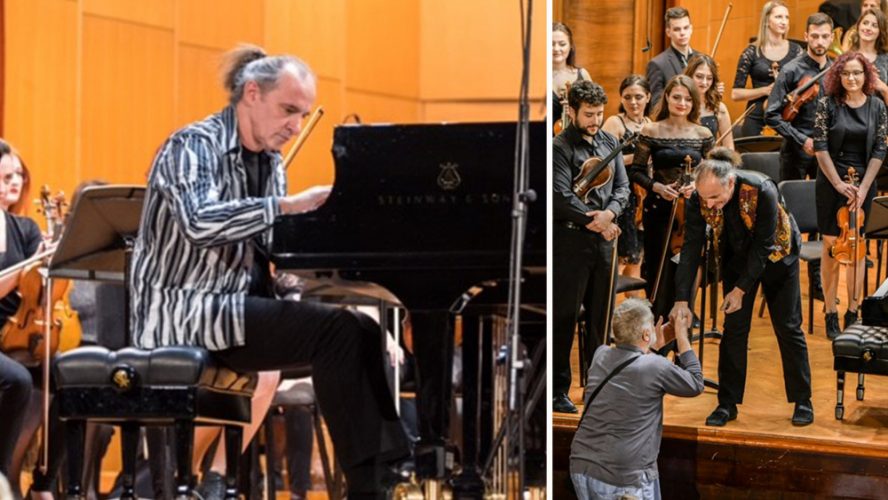 Over 1,100 people squeezed into Kolarac Foundation Concert Hall in Belgrade with anticipation. The performance was broadcast live throughout Europe and received enormous attention from the nation’s newspapers, television, and radio networks. The performance created palpable excitement in the concert hall. According to Gekić, “the shock and the furore after the performance was hard to describe.”

Gekić was accompanied by the 85-piece Symphony Orchestra of the Academy Arts of Novi Sad under the baton of Maestro Andrej Bursac. 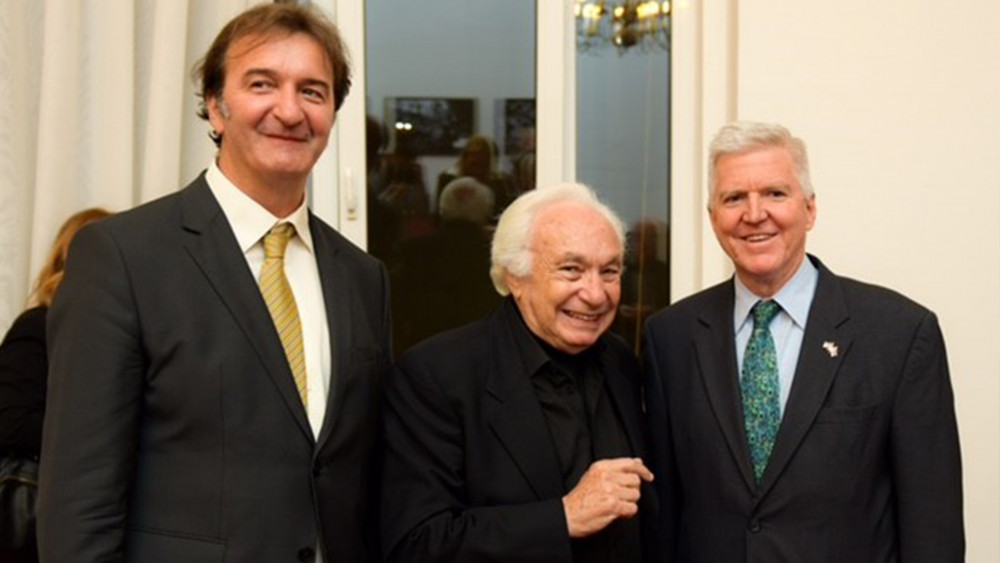 The United States Ambassador to Serbia, Kyle Scott (pictured right), the United States Cultural Attaché to the Republic of Uzbekistan (pictured left), and other dignitaries and high profile guests attended the concert in Belgrade in support of the works presented. Composer Fredrick Kaufman (pictured middle) discusses his works and celebrates the success of his work. 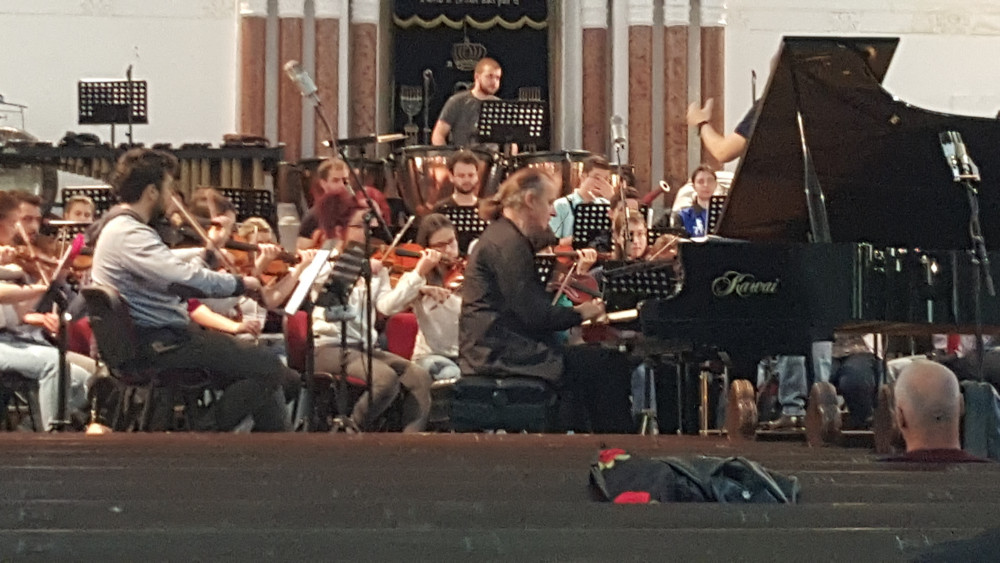 Nearly 180 musicians prepare for a momentous performance celebrating the 45th Anniversary of the Academy the Arts and the 60th Anniversary of the Novi Sad Music Festival (NOMUS) at the 18th Century Novi Sad Synagogue. Gekić committed the entire “Guernica” to memory, in addition to Beethoven’s Choral Fantasy, op. 80. At the end of the evening, Dean Siniša Bokan of the Academy gave a celebratory speech about the exceptional contributions made by presenting musicians and institutions to the world of music and art. 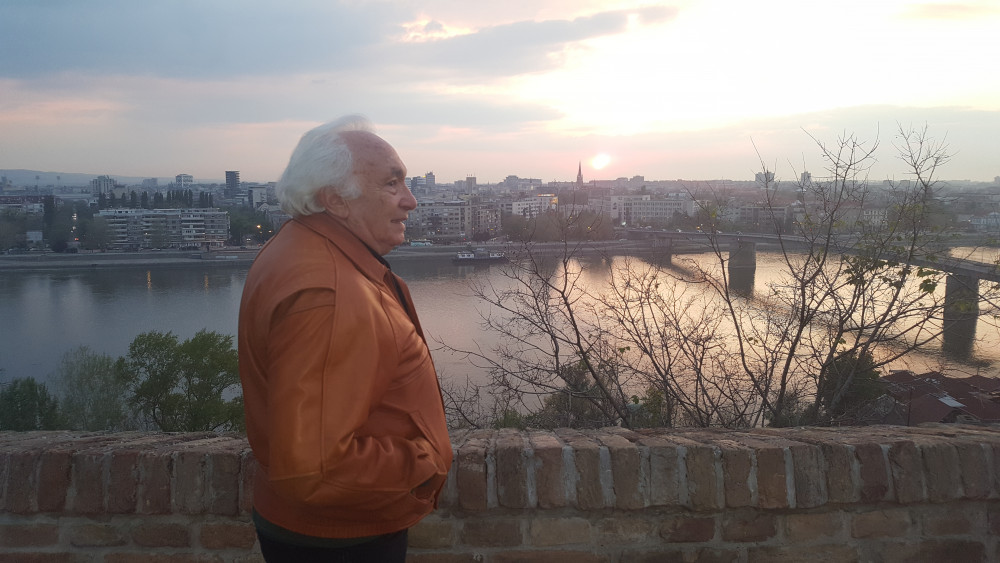 Fredrick Kaufman is a well-known American composer of over one hundred and forty published compositions that have been performed worldwide by orchestras such as the Warsaw Philharmonic, the Israel Philharmonic, the Moscow Chamber Orchestra, the Moscow Symphony Orchestra, the Czech Radio Orchestra, among many others. He held the position of Composer-in-Residence at FIU, was the founding director of the FIU School of Music for ten years, and established its internationally acclaimed FIU Music Festival.

Kaufman, no stranger to the devastation of war upon the human spirit, was a veteran of war in the Middle East. He has written several anti-war orchestral works, such as “Dance of Death,” “Lachrymose” Cello Concerto, and his widely performed Concerto for Cello and String Orchestra, “Kaddish.”

“I feel strongly that the time is right at this wild juncture of history for an anti-war composition that not only depicts the horrors of war, but cries out for peace, love, and a positive approach to life in the future,” said Kaufman. “It is through contemporary music that we are able to deal with the tragedies of war appropriately. There is no doubt that this music was so well received because of its relatability to the Serbian people who have endured so much.”