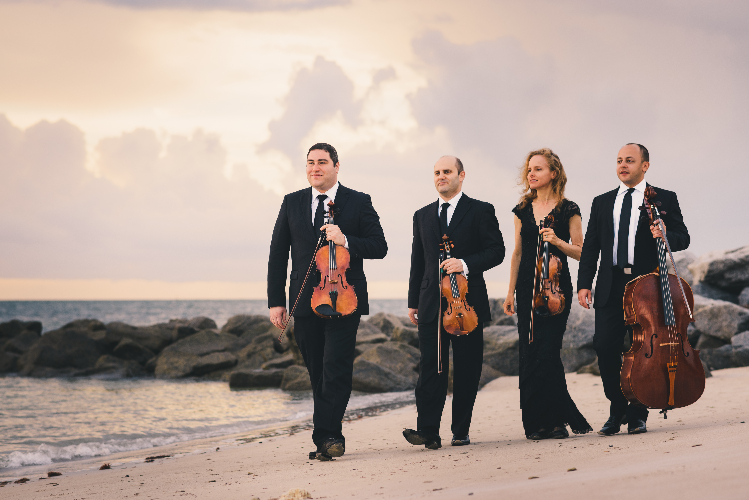 The Amernet String Quartet chose rarely performed works by Mozart, Dvorak and Webern rather than chamber music warhorses for their annual visit to the Mainly Mozart Festival on Sunday. Playing in peak form, Florida International University’s ensemble in residence produced an evenly balanced, rounded sonority in the difficult acoustic of the Biltmore Hotel’s Danielson Gallery in Coral Gables.

Anton Webern was one of the pillars of the Second Viennese School, the leading proponents of atonality as the bold future of 20th-century music. Like his mentor Schoenberg, however, his artistic roots were steeped in romanticism. Webern’s Langsamer Satz, written in 1905 and published only after the composer’s death, opens with a gorgeous violin melody that could have come right out of a tone poem by Richard Strauss. Misha Vitenson played it with a heavy bow, producing a big, enveloping sound. Michael Klotz’s more restrained viola solo was no less intense. The section where the violin plays high harmonics over the viola melody was particularly striking.

Dvorak’s String Quartet in D minor, Op. 34 is an early work and uncharacteristically dark in tone.  The Amernet captured the underlying turbulence beneath the opening Czech melody and navigated the curving melodic lines of the first movement’s two subsidiary themes adroitly. Marcia Littley’s sonority has grown in depth and presence, and she filled Dvorak’s unusually prominent second violin part with keen skill and fine tone. The performance gradually accumulated power throughout the opening Allegro with the brusque ending an emphatic surprise.

The quartet’s unanimity and accuracy came through strongly in the Polka and Scherzo, the players capturing the dance rhythm while allowing the music’s folk infused strains to unfold organically. In the nostalgic Adagio Vitenson encompassed the lengthy solo with silvery tonal hues, the sound never turning harsh even when he played at full force. After three movements of subtle musicianship, the players really let go in the Poco allegro finale, attacking the music with bite and bringing a driving, harder-edged sound to the country dances.

Mozart’s Divertimento in E-flat Major, K. 563 is a six movement, nearly forty-five minute work for string trio that only receives occasional performances in its entirety. Individual movements are sometimes programmed as stand-alone pieces.

Vitenson, Klotz and cellist Jason Calloway collaborated on a classically scaled performance, the terraced dynamics never reaching extremes of loudness or softness. Taking the long measure of the score, the opening and closing movements were played at a relaxed pace and the players infused the score with the ideal salon aura.