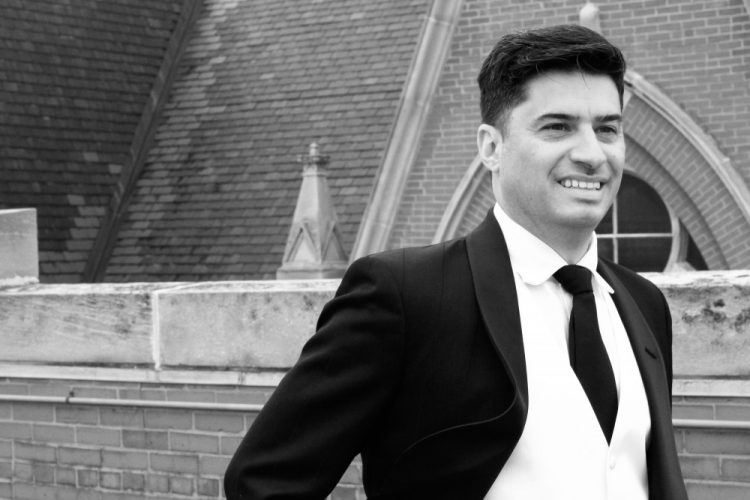 This season, Javier Jose Mendoza will step onto the podium as the first Mexican-American conductor of FIU’s largest music ensemble, the FIU Symphony Orchestra, with plans to give it a broader, more varied repertoire.

As a young, progressive Mexican-American from America’s heartland, Indiana, he is uniquely poised to become a cultural leader in South Florida with a desire to improve, ongoing dialogue with the local community. Representing a new generation in classical music, he is strongly committed to engaging concertgoers of all ages through culturally-relevant and innovative programming in order to re-energize its appeal to young people.

According to School of Music Director Robert B. Dundas, “All of us at the FIU School of Music are thrilled with the appointment of Dr. Mendoza as the new “maestro” of our Orchestra.  He was the unanimous choice of faculty and students alike. I am very confident that he will build on the proud tradition of this distinguished ensemble and bring it to ever greater heights.”

Maestro Mendoza is one of a few American conductors actively working with an El-Sistema-inspired youth orchestra program in Latin America. He has led many concerts as guest conductor of El Sistema de Orquestas de Guatemala and the Escuela Municipal de Musica and has been a conductor with Opera Maya in Quintana Roo, Mexico and presented the first orchestral concert performed in Tulum, one of the last cities built and inhabited by the Maya.

Mendoza has appeared as a conductor with the Chicago Latino Music Festival, the largest festival of its kind in the USA. This season he will tour with the Chicago Arts Orchestra appearing at the Catedral Metropolitana, the Anfiteatro Simon Bolivar and Sala Nezahualcoyotl in Mexico City, and will be a guest conductor at the Montessori Canta Festival in Guatemala City.

He studied at Butler University with Henry Leck and received his Master of Music degree from the University of New Mexico, where he was mentored by conductor Bradley Ellingboe. While in New Mexico, he was an apprentice conductor of the New Mexico Symphony Orchestra and later received his Doctor of Arts at Ball State University under the tutelage of Douglas Droste. He is classically trained at Europe’s Accademia Musicale Chigiane in Siena, Italy.

Currently he is serving as the artistic director of the Chicago Arts Orchestra (CAO), where he is active in a movement to unearth and re-debut forgotten works from viceregal Latin America and is energetically re-premiering pieces from archives in Mexico, Guatemala, and Spain in an effort to bring this music back into public awareness. CAO has also been known to perform neglected works by composers who have been marginalized by birth, ethnicity, religion, or circumstance.

How did you become a Panther?

I was living and working in Chicago for the past 14 years. I was the Orchestra Director at the University of Illinois at Chicago when I saw the position announcement for the Director of Orchestral Studies here at FIU. I had not spent a lot of time in Miami, but I was aware of the vibrant and growing arts scene. Institutions like the Frost Art Museum and the Frost Museum of Science have already seeped into the consciousness of my colleagues up North. I was already familiar with the work that FIU’s ensemble-in-residence the Amernet String Quartet was doing and also with violinist Robert Davidovici. Colleagues in Latino Studies at UIC also mentioned FIU as a Hispanic serving institution and its rapid growth.

Given my advocacy within the Latin American community, I knew that this was an opportunity that I did not want to pass up. It is an outstanding place to be making music right now. The arts scene has exploded in this city, and it is very exciting to be a part of the artistic dynamism that is going on in South Florida. I already find that the young cultural life of Miami is very energizing.

How did you get into music and when did you choose to make music a career?

I often share with people that I decided to be a conductor in 4th grade when I took a school field trip to see the Indianapolis Symphony. From that day forward, it became a lifelong goal. Music became my life even though I came from a non-musical family. It is proof that these types of concerts do have an impact on children such as myself, which is why I so strongly advocate for them by offering these types of concerts.

Anyway, I started playing horn in 6th grade and then in band all through school. We did not have a school orchestra so I was very involved in marching band. I was the drum major of my high school marching band during my senior year and we finished 5th place at State Finals in Indiana- a very big deal in that part of the country!

I decided to pursue a career in conducting when I was an undergraduate student at Butler University. During my graduate studies at the University of New Mexico, I conducted the musical, worked with the opera, and was an apprentice conductor at the New Mexico Symphony Orchestra under Roger Melone. After two years in the high desert of New Mexico, I headed to Chicago where I enjoyed collaborating with many wonderful artists on important works. I feel a bit like I am getting to have my cake and eat it too because I am able to work with the wonderful students here at FIU while continuing to collaborate with institutions like the Chicago Latino Music Festival and the Ravinia Festival back in Chicago. I intend to involve my FIU students in these projects as much as I can.

What do you enjoy most about conducting an orchestra?

The people! For me, music does not happen without human interaction and I love connecting musically, spiritually and emotionally with others to really make music evocative and meaningful. I already feel so committed to my students. They are such a diverse group, coming from different parts of the globe and speaking many languages. I enjoy working with them because of the energy that they put into performing is electrifying.

Who is your favorite composer?

This is constantly changing based on my performance life and mood, but I always come back to Mozart and Beethoven. I gravitate to 18th century galant works because, like Mozart, there is elegance in simplicity and a feeling of sublime symmetry and balance.

I have made my professional career interpreting 18th-century music and new works. I always find it important to include Hispanic composers from the Americas during the same era since their work is often overlooked in mainstream classical concerts. I mention this because 18th century masters like Mozart are wonderful, but what do we know about people who lived in the same era, but who were writing under different circumstances? What did Mozart learn from them, if he did, and what did these lesser-known composers learn from artists like Mozart and Haydn? I enjoy the historical context in which this music was made and widening audience perspective of Western music of the era. My album, Al combate, which I did with the Chicago Arts Orchestra, is entirely dedicated to the 18th-century works written in the New World. Usually people are surprised to find out that serious art music was written in the New World during the colonial era, but when they hear that these works are pleasant and entertaining they are even more surprised. For me, it is an important part of Hispanic Heritage and the collective heritage of the Americas. Culture, art, architecture, and music, these things all thrived in the urban centers of the Hispanic New World and people hardly know about it.

Is there a particular concert that you look forward to sharing with audiences at FIU’s Wertheim Concert Hall?

This concert will show that just because someone has a Spanish surname doesn’t mean that their music might fit into a certain mold. Hispanics are writing all types of music today. For example, composer Arturo Rodriguez is writing concert music, video game music, and film music. I am also looking forward to sharing Moncayo’s Huapango which is a nationalistic work that incorporates Mexican folk songs in order to achieve a “Mexican” sound. In this case, the setting of these folk tunes invoke a lot of cultural pride among Mexicans. This work is considered by many to be Mexico’s second national anthem, or as I like to say, the instrumental national anthem. I think the sentimentality that it conjures in people is great, and it does it with no text- it is truly an entertaining and powerful work.

What has been one of the most rewarding moments of your career?

At my first performance as a conductor at the University of New Mexico, one of the ensemble members approached me and said that her dad was so moved by our performance that he was brought to tears. When I asked her why, she replied that he was very proud of me because he had never seen a Hispanic conduct classical music.

Something fun. What’s on your playlist?

A small peak into my ipod would show that in addition to serious art music, I listen to Latin Rock, Latin Pop, Classic Country like Waylon Jennings, Johnny Cash, and Hank WIlliams Jr. (I am from Indiana!), Bluegrass, Norteño music from Mexico, Rock and Roll, and even a little EDM and House. I have a fascination with Pink Floyd, so much so that last summer I flew with my wife and friends to hear David GIlmour (guitarist from Pink Floyd) perform at the Amphitheater in Pompeii. I was really impressed with Gilmour’s stage presence and virtuosity. The setting was incredible- ancient ruins and only about 2,000 people in the audience.

What programming do you have planned this year?

We have a few Hispanic flavored works, but I also made sure to include Stravinsky and Saint-Saens. It is important not only for our students to learn a variety of styles, and to give Miami audiences a bit of everything. We will perform the powerful Saint Saens Symphony and celebrate Hispanic composers for the FIU Music Festival this November. We will close our season with Igor Stravinsky’s The Firebird Suite this late April.