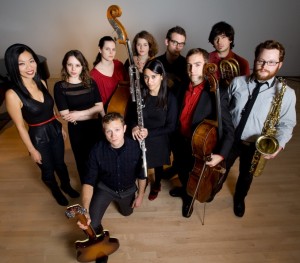 The New Music Miami ISCM Festival welcomes a variety of innovative and well-known composers and performers from all over the globe in celebration of its 19th successful season in South Florida.

The festival, founded by Professor of Music in Composition and Composer-in-Residence at the College of Architecture + The Arts Miami Beach Urban Studios Orlando Jacinto Garcia, provides exciting performances along with master classes and panel discussions with the invited guest artists. Garcia’s own solo and chamber works have been nominated for Latin Grammys in 2009, 2010, and 2011 in the best contemporary classical composition category. The recent release of his cd,”Auschwitz” on the Toccata Classics label in September 2014 received positive reviews by both Grammophone and The New Music Web International Review.

The 2015 festival will open on January 16th with a performance on Lincoln Road at the College of Architecture + The Arts Miami Beach Urban Studios. The Fonema Consort Ensemble, a new music ensemble hailing from Chicago, will perform music from the Americas, including works by Joan Arnau Pamies, Shawn Lucas, FIU Alumnus Pablo Santiago Chin, and the South Florida premiere of a new work by Orlando Garcia.

On Friday, January 30th at 7:30pm, the Herbert and Nicole Wertheim Performing Arts Center invites audiences to enjoy a program featuring violinist Jennifer Choi and the FIU NODUS Ensemble, joined by the strings of the FIU Symphony Orchestra. The concert will feature the world premiere of una marea creciente (a rising tide), a new work for violin and string orchestra by Orlando Jacinto Garcia. Garcia shares the following details, “The title was suggested by the ascending sonorities that can be heard in different sections of the work as well as the melodic contour of the solo violin part. The title is thematic in that it represents current concerns about sea level rise, which is an issue of greater concern to me now that I am living on Miami Beach.” The concert will also feature the US premiere of a work by Canadian/Polish composer Peter Paul Koprowski with Grzegorz Nowak and Garcia conducting.