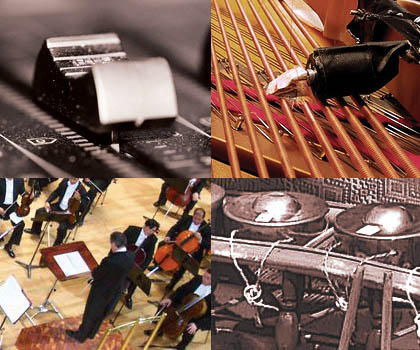 The New Music Miami Festival presents its 17th season of concerts and related events. The festival presents new music for diverse instrumentation throughout Miami, bringing together innovative composers and thinkers along with adventurous performers and audiences.  The festival begins in late winter and runs throughout the spring, providing exciting performances along with masterclasses and panel discussions with invited guest artists.

New Music Miami has developed numerous partnerships with presenting institutions, such as the Forum for New Music from Latin America and Music of the Americas Festival.  The festival has enabled composers and performers to participate and present their work from countries such as Canada, Cuba, Spain, Mexico, Italy, Germany, England, and France.

The New Music Miami Festival originally began in 1993 as the May in Miami Music Festival, an annual, week-long festival occurring every May.  The festival featured nightly concerts with performances by performers from the New World Symphony and FIU faculty of renowned, emerging, and student composers. In 1997, the festival expanded its scope by scheduling concerts throughout the year and became the New Music Miami Festival.  This followed another change in format in 2002 when the festival became the New Music Miami ISCM Festival, reflecting FIU’s status as an associated chapter of the International Society for Contemporary Music (ISCM).

The founder of the festival, Dr. Orlando Jacinto Garcia, is also the Director of FIU’s School of Music, as well as the artistic director of the NODUS Ensemble and the FIU New Music Ensemble. The distinctive character of his music has been described as “time suspended-haunting sonic explorations” that he developed from his studies with Morton Feldman among others.

For an overview of the Miami Music Festival, click here.

For more on this season’s schedule, please visit www.newmusicmiami.org.