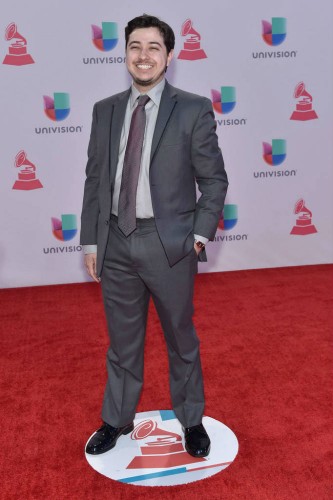 At the 58th Annual Grammy Awards, music technology alumnus, Ricardo López Lalinde ’12 added another award to his collection for his work as a recording engineer and arranger. This time, he won the 2016 Grammy Award for “Best Latin Pop Album” for his work behind Ricky Martin’s album, A quien quiera escuchar (Deluxe Edition).”

Lalinde is a multi-instrumentalist, audio-engineer, arranger, composer, songwriter, and producer who was born in Bogota, Colombia. Lalinde relocated to Miami at age 10, and began his passion for music by learning both guitar and piano, and later cello as a high school student.

“My time at FIU was vital to achieving my dream of working in the music industry, Lalinde said. “The School of Music allowed me to grow as both a musician and a professional with the help of their faculty and staff.”

Having a diverse musical background, Ricardo has been involved with bands and ensembles in many genres ranging from hardcore punk to jazz to classical and even to traditional cuban charanga.

Today, Lalinde’s knowledge in music technology has allowed him to work as a studio manager, arranger and engineer under Latin Grammy Award-winning producer, Julio Reyes Copello. Julio Reyes Copello has become an inspirational work-mentor for Ricardo and has led him to take part on albums by top names in both the Anglo and Latin music markets such as Ricky Martin, Marc Anthony, Alejandro Sanz, Il Divo, Laura Pausini, Diego Torres, Fonseca, and Andrés Cepeda, as well as up-and-coming artists Brika, BOGART, and Paula.

The Latin Grammy Awards is awarded by The Latin Academy of Recording Arts & Sciences to recognize outstanding achievement in the Latin music industry. The Latin Academy is a multinational membership-based association composed of music industry professionals, songwriters, musicians, producers, and other creative and technical recording specialists. The organization is dedicated to improving the quality of life and culture for Latin artists and music.