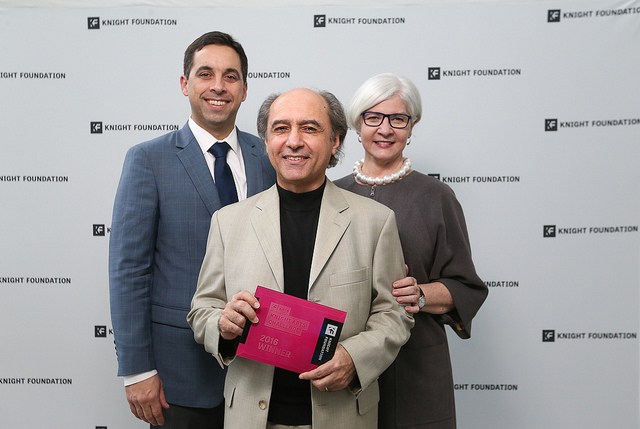 On November 28, 2016, the FIU School of Music’s Miami International GuitART Festival (MIGF) was recognized as one of the winners of the 2016 Knight Arts Challenge during the 9th annual celebration at the New World Center in Miami Beach.

The Knight Arts Challenge is an annual program funded by the The John S. and James L. Knight Foundation designed to fund ideas that brings South Florida together through the arts.

This year, the Knight Arts Challenge awarded 2.78 million to 44 Miami artists “who speak to a Miami just beneath the surface, to the real, complex and incredibly interesting place not usually seen or heard,” according to Knight Foundation’s Arts Program Officer Adam Ganuza. “These projects and programs invite us to dig deeper into this special place we call home, to look into a mirror, and to realize that the city’s “magic” isn’t in the clouds or in the coffee. It’s in us.”

The MIGF, spearheaded by FIU guitarist/composer Mesut Ozgen, will be awarded a $55,000 grant by dedicating the festival to Cuban music and creating cultural exchanges between Havana and Miami guitar orchestras. One of the conditions of the grant is to find funds to match Knight’s commitment. Once matching funds have been raised, the MIGF will present world-class artists from Cuba and all around the world, including the Havana Guitar Orchestra, as well as a tribute concert to the legendary Cuban composer Leo Brouwer.

“After the successful inauguration of MIGF 2016, I invited a wide variety of renowned artists for the festival in 2017,” noted Ozgen. “From the first woman to win the National Fingerstyle Guitar Championship Muriel Anderson and virtuoso guitarist/composer Evan Hirschelman, to the prodigious young guitarist Celil Refik Kaya, winner of Boston GuitarFest and JoAnn Falletta Concerto Competitions, Flamenco virtuoso Felipe Carvajal, and Microtonal Guitar Duo with their prize-winning instruments.”

The festival will take place at the Florida International University School of Music from February 20 through February 26, presenting ten concerts, three lectures, five masterclasses, a composer’s panel, as well as a Luthiers Expo, which will display some of the world’s best hand-built guitars.

Save 15% off a festival pass now through December 25!