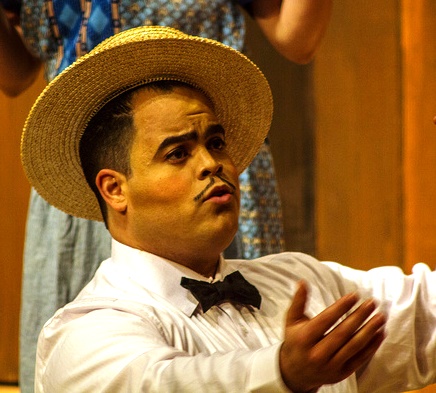 Each time he steps onto a stage, tenor Edgar M. Abreu looks for new ways to captivate his audiences and draw them into the performance. That’s exactly what he intends to do in the leading role as King Ouf I in Emmanuel Chabrier’s L’Étoile with the FIU Opera Theater this February.

This rarely heard satirical opera buffe was much admired by Chabrier’s contemporaries, including Debussy, Satie, Ravel, Poulenc, and Stravinsky. Featuring disguise and deception, astrologers and ambassadors, peddlers and lovers, this whimsical opera tells the story of King Ouf, a monarch on the search for a suitable subject to execute as a birthday gift to himself.

“I’m having a wonderful time discovering my character King Ouf! He embodies the essence of what one would expect in a theatrical performance-he is childish, crazed, compassionate, fickle, and dramatic at all times. Plus, who wouldn’t want to play royalty!” noted Mr. Abreu playfully.

Under the direction of Robert B. Dundas, Director of FIU Opera Theater, the opera theater performs one fully staged production each concert season, which allows students to experience all of the elements that encompass a professional opera performance.

“Every season, I prefer to introduce students to a variety of repertoires from different cultures in order to enhance their educational experience. I also have to look very carefully at the strengths of our students. For many of them it’s the first time that they’ve done anything operatic,” stated Professor Dundas.

As a student at FIU, Mr. Abreu has appeared as a soloist for repeat Messiah performances and has participated in master classes by artists such as Helen Donath, Carol Farley, Marcello Giordani, Leona Mitchell, Sherill Milnes, and Virginia Zeani. In 2014, Mr. Abreu made his operatic debut in a supportive role as Lippo Fiorentino in Kurt Weill’s Street Scene with the FIU Opera Theater. Classical South Florida Review wrote that “Edgar Abreu made the most of Lippo Fiorentino’s scenes, singing and dancing with abandon.”

“Competition to be cast in a leading role is intense, but we are all still encouraging and supportive of another,” said Mr. Abreu. “There is a lot of talent in this production, and I feel very fortunate to be where I am.”

Currently, Mr. Abreu is Music Director and pianist at Our Lady Queen of Heaven Catholic Church and Director of Florida Atlantic University’s summer piano and creative writing camp, Teaching Outstanding PerformerS (TOPS). Mr. Abreu earned his Bachelor of Music in Vocal Performance from Florida Atlantic University in 2011 and is currently working on obtaining his Master of Music in Vocal Performance from Florida International University under the tutelage of Professor Dundas.

L’Étoile will take place at the Herbert and Nicole Wertheim Performing Arts Center on Saturday, February 21, at 7:30pm and again on Sunday, February 22, at 3:00pm. To learn more, click here.