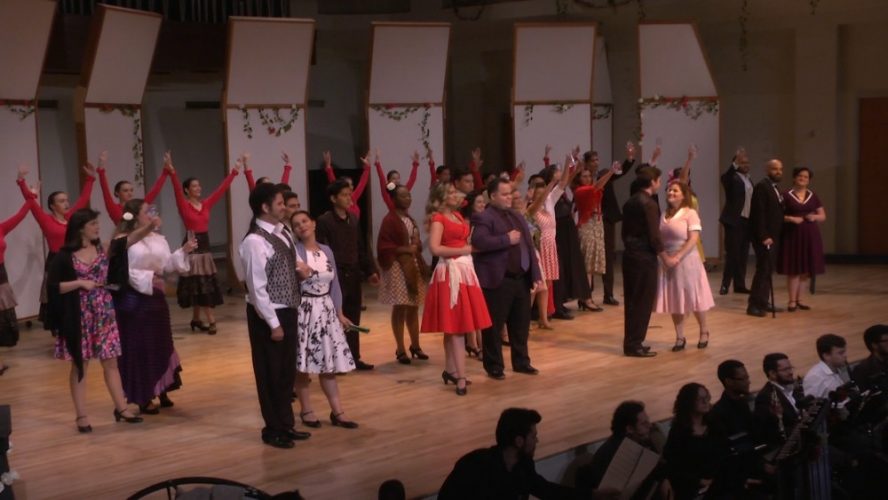 For the first time, the FIU Opera Theater produced a fully-staged zarzuela at FIU on March 1 and 2: Doña Francisquita. It is based on Lope de Vega’s play La discreta enamorada, and tells the story of young lovers, Francisquita and Fernando, in mid-19th century Spain during the Carnival season.

It was a massive collaboration that began over 4 months ago and involved over 40 cast members, 20 chorus members, 9 ballet dancers from Conchita Espinosa Conservatory of the Arts Segovia Ballet Español, a 45-member FIU Symphony Orchestra, a team of artistic and technical staff, and support and guidance from the Hispanic-American Lyric Theatre.

Zarzuela was already becoming a tradition at FIU, so the decision to bring Doña Francisquita to life was eagerly embraced by the students and production team.

“Over the past 20 years, the FIU Opera Workshop has presented several zarzuela showcases and concerts, working with organizations such as Opera Fusion and Florida Grand Opera. We selected Doña Francisquita, because it is probably the most famous and authentic of Spanish zarzuelas,” said Robert B. Dundas, Director of the FIU Opera. “It has its challenges as well, but the students and the faculty threw themselves into it and transformed into authentic madrileños.”

Professional level productions are a part of the opera curriculum, including one fully-staged opera per year, as well as smaller-scale workshop productions and community outreach performances.

The program is designed so that students develop the skills necessary for a successful opera career through extensive on-stage performance experience, regular coachings, and master classes by acclaimed guest artists.