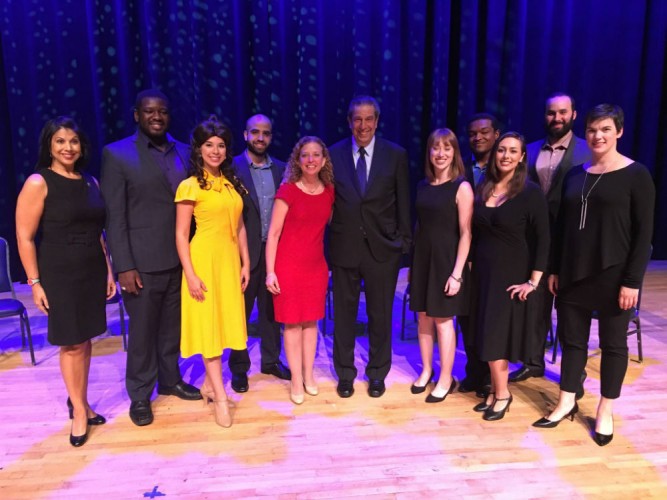 Jewish American Heritage Month was celebrated musically recently with a salute to the many Jewish American composers who created popular Broadway musicals in a one-hour show starring Jon “Bowzer” Bauman and the Florida International University singers that took place at Century Village in Pembroke Pines.

Jewish American Heritage Month is celebrated during the month of May as an annual recognition and celebration of Jewish Americans for their achievements and contributions to the United States.

The annual JAHM celebration is credited to the efforts from U.S. Rep. Debbie Wasserman Schultz (D-Weston), as well as late Sen. Arlen Specter (D-PA) and the Jewish Museum of Florida.

President George W. Bush issued a ceremonial Proclamation to recognize JAHM beginning in May of 2006.

The Century Village show was hosted by Wasserman Schultz along with Bauman, known for his comedy and singing with the rock music group “Sha Na Na,” acting as master of ceremonies.

The 2,000 who attended the show were treated to a diverse collection of songs written by famed Jewish American musical composers, ranging from Irving Berlin to Stephen Sondheim.

Songs from six Broadway shows as well as two additional popular songs were performed by the Florida International University Singers.

“The purpose of Jewish American Heritage Month is to promote understanding of the countless contributions that American Jews have made to the fabric of American life. From science and technology to education and entertainment, Jews have given so much to this country, but yet so many people are unaware of that. In many areas of the United States, there are Americans who have never met Jews,” said Wasserman Schultz.

“The importance of Jewish American Heritage Month is in education of the achievements of Jewish Americans. Our program today salutes the high quality of music by the Jewish American composers that make people ponder through Broadway musicals themes of bigotry, intolerance, perseverance, determination, honesty and forgiveness,” added Wasserman Schultz in her remarks prior to the start of the show.

The eight FIU singers opened the show singing in unison to Carly Simon’s “Let The River Run.” Soprano Amanda Orihuela followed, singing “I Could Have Danced All Night” from the Broadway musical “My Fair Lady” from composers Alan Lerner and Frederick Lowe.

Bauman was both performer and host, citing the achievements of Jewish American composers Irving Berlin, Leonard Bernstein, Jerome Kern, the team of Alan Lerner/Frederick Lowe, Alan Menkin, the team of Richard Rodgers and Oscar Hammerstein and Stephen Sondheim prior to introducing the musical selections and individual FIU singers.

Known specifically for his comedy, flexing his muscles with a pose of a wide grin as “Bowzer,” the well-known member of the “Sha Na Na” group, Bowzer acted the part, speaking as a “greaser” with a limited vocabulary as a stereotyped rock n roller.

Bauman, when not acting as “Bowzer,” showed his flair in classical music playing selections from Bach and Chopin to much applause from the audience. Bauman was enrolled at the Juilliard School, known for its selection of young gifted musicians, at age 12.

“This is for my Jewish mother, who always wanted me to play Carnegie Hall and classical music,” said Bauman after performing the classical music selections.

Among other musical highlights were: bass singer Rohan Smith singing “Old Man River” from Jerome Kern’s musical “Show Boat” that focused on issues of racism in the American South, soprano Katherine Maichel and tenor Kevin Barrios singing “Tonight” (from Leonard Bernstein and Stephen Sondheim’s “West Side Story”) and the FIU singers singing together with the audience to “God Bless America” by Irving Berlin.

Other FIU singers performing were: soprano Nadya Borno (“Beauty And The Beast”), mezzo soprano Hanah Davenport (“It Might As Well Be Spring”) and baritones Roberto Lopez-Trigo and Adolfo Rodriguez (“Agony”).

“I am very proud of the work of all our singers at Florida International University, many who will go on to have professional careers in music,” said Kathryn Longo, coordinator of Choral Studies at FIU.

Jewish composers have led the way to popular songs in a milieu of musical genres, but with particular excellence in Broadway and the Great American Songbook, according to author Charles Silberman.

“With the notable exception of George M. Cohan and Cole Porter, the composers who have given the Broadway musical its distinctive shape have been almost all Jews,” wrote Silberman in his 1985 book “A Certain People.”